Gema Frías (right) with some of her volunteers / SUR

Plogging along in the Axarquía

Periana resident Gema Frías has collected more than 2,000 kilos of waste in her town, La Viñuela and Alcaucín in one month

Gema Frías, 48, an unemployed administrative assistant from Periana, was returning home one day when she decided to get out of her car and start cleaning the verge of the road that connects Puente de Don Manuel with her own village. "I had been noticing for some time, since the pandemic, that the verges were terrible, full of rubbish, and I decided I had to take action, to do something to put an end to this bad image for tourism and for the environment," she explains.

Frías has been going out almost every day for a month now to collect all kinds of rubbish from the verges of roads and has covered almost 50 kilometres so far. She has since been joined by around twenty other volunteers from Periana and the nearby villages of Alcaucín and La Viñuela, who accompany her on alternate days.

The volunteers have collected more than 2,000 kilos of all kinds of waste, filling 200 sacks, at an average of ten kilos per bag. "There is everything, but mainly cans, plastic bottles and plastic containers, lots of little bags, nowadays everything that is consumed is wrapped, it is individually packaged, we live in an individualistic society", said Frías.

"People keep asking me if someone pays me, and I tell them no, the town hall has only given me bags and gloves. I do this because I love my village and I want it to give it a better image for tourists and for the countryside not to be full of rubbish", Frías , who for 14 years has been writting a blog in which she shares news and reports about Periana and its 14 hamlets.

The challenge is set to continue for two more months, until the end of January. "We have almost finished with the main roads in Periana and the hamlets and we are going to focus more on La Viñuela and Alcaucín, and then we will continue to keep it clean for as long as possible,” explained Frías, adding, “I hope that people will become aware and we will not have such a pitiful image again.”

She admitted to being "very surprised" at the amount of things that people throw out of car windows and onto the sides of roads. She says she has found "cigarette packets, nappies, cans, bottles, plastic bags, cables, batteries, furniture, wooden crates and car wheels”.

Frías has learned that in northern Europe the practise of 'plogging' has been fashionable for several years. It believed to have started in Sweden around six years ago and consists of joggers taking bags with them to pick up the rubbish they find along the way. "I didn't know it was called that, but yes, we are doing good exercise, walking several kilometres every day while collecting rubbish.”

She has also learned that she is not the only person to ‘plog’ and that she has discovered that in the nearby town of Ventas de Zafarraya in Granada province, resident José Bolaños has been doing the same thing for many years. "He is a great example for me" Frías concludes. 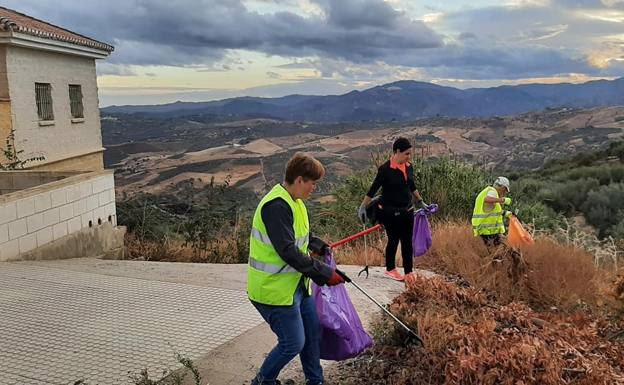 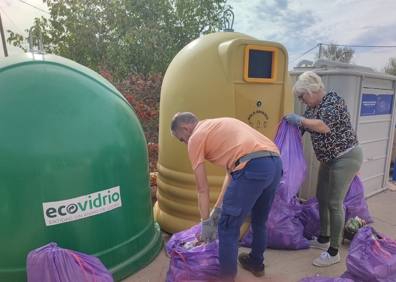 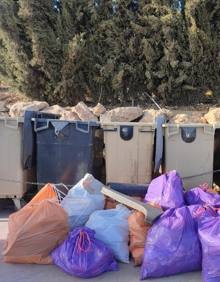 The volunteers and bags of rubbish they have collected / SUR