One of the magical spots in the Enchanted Forest. / JA

A walk through Parauta's enchanted forest

This hiking route sets off from the lower part of the village, in the Serranía de Ronda's Genal valley

A short walk among chestnut trees that starts in the village of Parauta in the Serranía de Ronda. It uses a section of the PR-A 222 route which runs between Parauta and Cartajima.

How to get to the start point

This route starts in the lower part of Parauta village, at the end of Calle Salvador Márquez, where it joins the Camino del Molino (coordinates: 36.654651, -5.130673). To get there by car, there is a small bypass at the entrance to the village. Another option is to leave the car parked in one of designated areas and then cross the village by foot.

Description of the walk

1. This hike was the idea of Parauta town hall, but was made a reality by the sculptor Diego Gerrero. With entertainment for children at the forefront of this short walk, along the route there are various mythical forest characters which have been sculpted and painted on the trunks of the trees and other landmarks.

2. Just at the beginning of the Molino path, there is a small rest area, with a sign that has information about the Parauta and Cartajima route (PR-A 222). It is important to keep in mind that the Enchanted Forest route uses the first part of this path, so signposts from this route can be used to navigate. The walk is generally very easy and has wide paths, with some sections even being tarmacked. 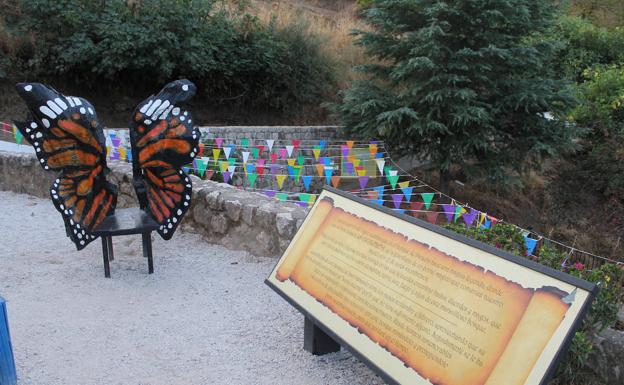 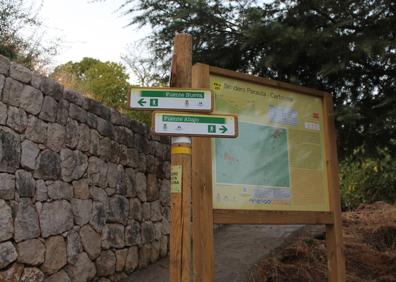 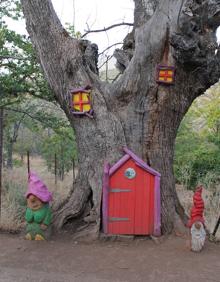 The tale of the route's origins. The walk coincides with part of the PR-A 222 route. Some of the chestnut trees are decorated with doors and windows along the route.

3. Before the walk starts, there is a sign for the Enchanted Forest and an inscription which tells the story of the mythical characters found on the route. After that, the path starts to descend gradually into the dense chestnut wood. This makes it an ideal route to do at the end of November or beginning of December when the autumnal copper tones are displayed in all their glory. 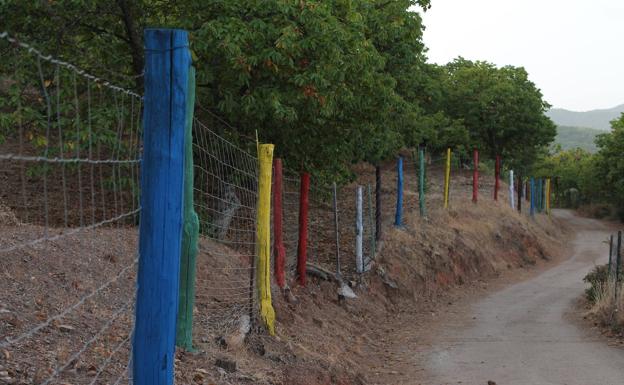 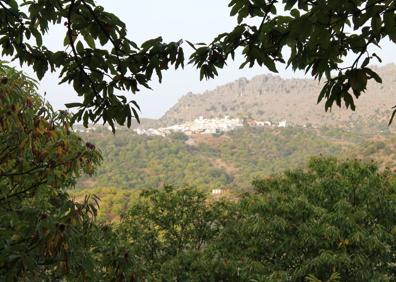 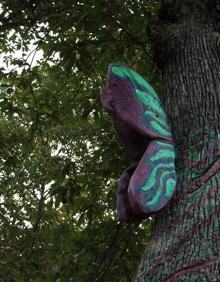 The route descends gradually. The view of Cartajima and Los Riscos from Parauta's chestnut grove. The forest's mythical characters dotted all over the area.

4. Magical creatures, tree houses, frogs and owls are all found along the route. There are also benches to rest and enjoy the panoramic views. The views of the impressive chestnut forest, the village of Cartajima and the karstic landscape of Los Riscos are among some of the best. Another landmark is the three wishes fountain, located under a large oak tree.

5. Eventually there will be a sign marking the end of the Enchanted Forest route. The path can still be followed on the PR-A 222 route which goes all the way to Cartajima, but it is important to bear in mind that there is a steep descent which means a hard climb on the way back. To return to the start point, the same path can be used. This route is ideal to combine with a visit to Parauta, a well-kept village, which stands out for its charm. The dozens of bulrush chairs on the walls of the houses and the Inmaculada church of are examples of this town’s magical attraction.

This route mainly passes through chestnut groves, but there are also other species in this mountainous area, such as cork and holm oaks, arbutus (wild strawberry bush), blackthorn and poison ivy.

The route's main attraction is, of course, the chestnut grove, which is especially breathtaking in the last few days of November or first days of December. This is when the leaves fall, creating the spectacular autumnal scene in what today is known as the Copper Forest.

The fall of the leaves also coincides with the emergence of the thermophilic mushrooms, some of which are edible.

In terms of fauna, large birds of prey which can be seen flying over the area.