Christmas lights on the Alameda, in Malaga. / ÑITO SALAS

In recent years the Galician city-port of Vigo has become a rival to Malaga by racing to be considered the ultimate colourful Christmas destination. We went to see whether Vigo can really claim to be Spain’s Christmas capital.

This century, Spain has gained two epicentres of Christmas celebrations - Malaga and Vigo. Both cities are vying to boast the world’s largest lights display and thereby earn the title of Spain’s Christmas Capital.

Vigo has indeed had the world talking about, with some describing it as the ultimate Christmas destination, putting even Lapland’s capital into the shade.

The town of Rovaniemi is (still!) considered the official hometown of Santa Claus, but in Vigo there lives yet another man who devotes himself passionately to Christmas and actively engages with this colourful holiday. His name is Abel Caballero. He is the city mayor and he is the one who makes the “magic”.

It never snows in Vigo but (with the help of 50 snow cannons) every winter snowflakes fall on people’s faces as well as on the snowball and snowman - gigantic installations in the city.

By the never freezing ocean, an ice rink for skating and a mount for skis and toboggans are set up.

Moreover, Lapland’s reindeer can be found “running” in Vigo, on one of the main streets.

As for auroras, the Northern Lights are recreated in Vigo with help of millions of illuminations. This year, 11 million (one million more than usual) LED lights don some 360 streets (about 25 more than last year), and almost a thousand trees with 3,000 theme decorations light up the city.

The city hall, with its enthusiastic mayor, has done its best to make visitors believe that Christmas indeed ‘lives’ in Vigo.

It is ‘loudly’ announced with the ambitious logo ‘Vigo, la ciudad donde vive la Navidad’ (Vigo, the city where Christmas lives) which is placed in the main shopping street, Calle Urzáiz, and has become a popular spot for taking selfies.

To estimate which of the cities, Malaga or Vigo, is more de'light-ful' is not easy. However, you can easily believe that lots of money is really spent to over-decorate main streets and squares of the cities.

Vigo used to spend some 800,000 (later 825,000) euros on its illuminations and Malaga used to have around the same budget for its lights.

This year, however, Vigo’s budget was increased to exactly 929,052.52 euros and Malaga city hall also has invested an additional 200,000 euros for its light shows.

So it looks like the leader in this financial “contest”, with one million euros, is Malaga.

How long the cities actually indulge in this Christmas atmosphere could be another of the criteria to define Spain’s Christmas capital.

The lights of Vigo, for example, were switched on 20 November at 8.30pm and will remain on until 10 January. Malaga lit its lights on 26 November at 6.30pm, and they will be switched off at midnight on 6 January.

Incidentally, the works for preparing for Christmas start earlier in Vigo as well. While Malaga began to install the lights on 27 September, in Vigo the works had already started in August. So, although Vigo is ahead in timing and duration, Malaga is a step ahead in budget. It seems two cities have drawn.

It appears the cities are aware about this competitive “equality”. In this case, originality is important. From the very beginning Vigo headed into the ‘heights’; the city came into the limelight after placing the highest (over 32m) Christmas tree - bigger than the one in Rockefeller Center (22m) and the tree in the Vatican (25m). Additionally, Vigo is quite unique in Spain, by decorating its natural araucaria tree on its Alameda.

Due to this real Christmas tree, Vigo might be even compared to London, where traditionally a pine tree flown-in from Norway is prominently displayed in Trafalgar Square.

Additionally, a 60-metre-high Ferris wheel looks somewhat like the London Eye. Actually, the mayor himself mentioned this resemblance by stressing that he wanted a Ferris wheel for Christmas and he was not ruling out a permanent one to compete with the London Eye.

London has been mentioned by the mayor a few more times. Once Abel Caballero said: “Let the mayors of New York, London, Tokyo, Paris and Berlin know that they were (we are) going to be simply the best!”

By the way, besides the pine tree and the giant wheel, Britain is noticeable in Vigo through the this year’s official theme music, John Lennon’s Happy Xmas, and huge posters that “promote” the merits of drinking Scottish whisky during these cooler winter days.

So, which of these cities might be christened Spain’s Capital of Christmas... Perhaps we should have Vigo as a capital in the north, and Malaga, in the south. Like two polar circles at opposite ends of the globe. What I actually discovered (after I saw in the Vigo centre the LED-lit chandelier that I had admired in Larios street several years ago), was that both cities use the same creative provider - Iluminaciones Ximénez S.A., an Andalusian company from Puente Genil (Cordoba). So it means that Andalucía wins anyway. 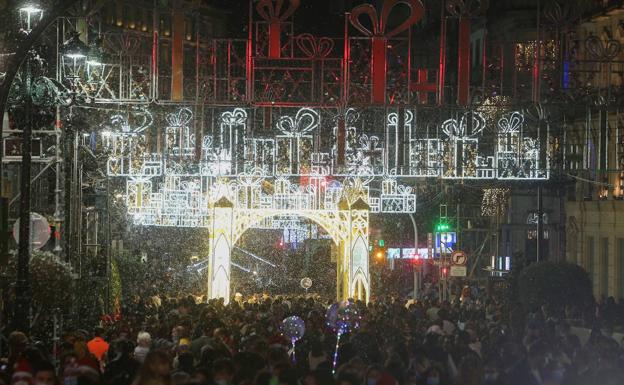 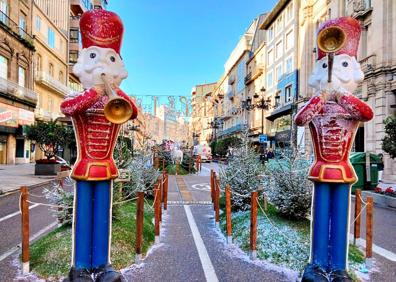 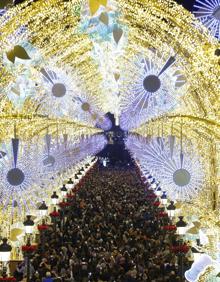