Soportújar: a walk through an astonishing village of witches

In the Alta Alpujarra region of Granada, on the south face of the Sierra Nevada, lies this small village which has made witchcraft its hallmark thanks to an interesting route through its streets. A surprise awaits you around every corner

In the Alta Alpujarra in Granada, in the heart of the Natural and National Park on the southern face of the Sierra Nevada, is a small village where broomsticks fly on the nights of a full moon. Black cats wander through its streets, secret spells are cast in its caves and there is even a Hansel and Gretel house where evil witches trick children by tempting them with sweets before throwing them into the cauldron. Is this real or fiction?

Well, the answer can be found an hour and 40 minutes from Malaga city, in Soportújar, to be precise. Exploring its nooks and crannies which are full of stories and legends is a good plan for a weekend outing. This rural destination in Andalucía has become fashionable now, so on Saturdays and Sundays it is busy with the type of tourists who love picturesque and unusual places.

The name Soportújar means ‘place of arcades’ and is due to the typical passages known as ‘tinaos’ which predominate in the architecture and urban layout of this small village. It played an important role during the Revolution of Las Alpujarras, which ended with the Moors being expelled from the territory back in the time of Felipe II. This meant that the village had to be repopulated with new inhabitants, most of them families from Galicia. And that is where the connection with the world of witchcraft comes from, which the village has recently turned into a tourist attraction to compete with nearby places which are popular with visitors, such as Pampaneira, Bubión and Capileira. 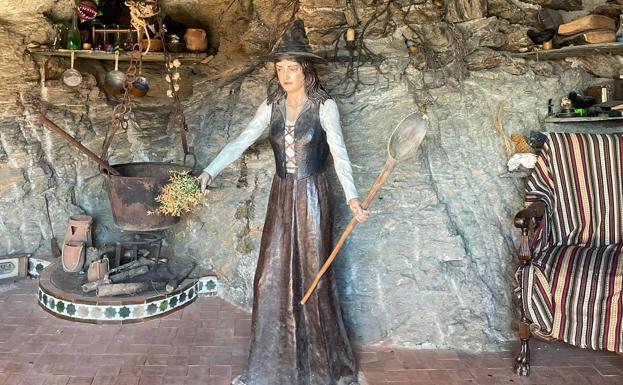 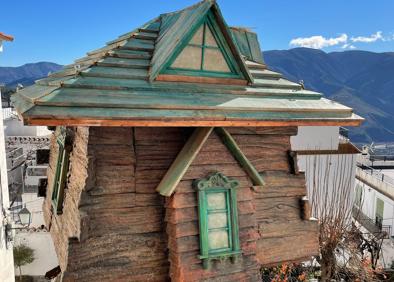 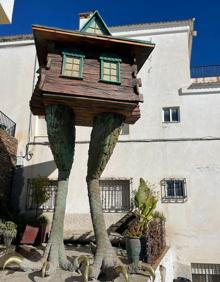 A surprise awaits you around every corner / A. NOGUÉS

It is said that when these settlers from the north arrived they brought with them their customs and pagan legends about witches, covens and rituals on dark nights, arousing the suspicions of their neighbours who lost no time in labelling these new inhabitants of Soportújar as sorcerers. This is what the village has now taken advantage of to create a themed route around its streets. It is well worth a visit.

The tour begins at the 'Cueva del Ojo de la Bruja', the witch’s golden cave which is the starting point of an unusual itinerary that takes you to caves, passageways, fairytale houses, impressive spiders, serpents, fountains with magical properties and figures of witches. There is a surprise around every corner, and we head to the cemetery on the outskirts of the village to start discovering them. You have to cross the haunted bridge to reach this point, where witchcraft is said to have been practised for centuries. Nowadays, the interior of the small building contains the figure of a sorceress producing magic potions and spells. Here, we are met by José, a guide from ‘Descubriendo Soportújar’, who accompanies us for the next 90 minutes and tells us about the curiosities and legends of this mountain village.

Before heading into the centre, we stop to look at the impressive views from one of its lookout points, which José says is the perfect place to watch the sunset on clear days. “You can even see the mountains of Africa, it’s fabulous,’ he says. We then walk towards an enormous sculpture representing the head of Baba Yagá, the first surprise which, like most of the other figures on the route, is the work of José Vera. It is a witch with penetrating blue eyes and a toothless smile who, according to legend, used to eat children who behaved badly. The sorceress – a character from Slav mythology who was said to live in the forests of Russia – used to inhabit a house with hens’ feet which is also tucked away in the narrow streets of this village.

Without making too much noise, because we don’t want to wake up Baba Yagá, we enter Soportújar. The main street leads to the Plaza de Abastos, beside the town hall – whose façade is dotted with eye-catching insects. The church of Santa María la Mayor, which was built on the site of a former mosque in the 16th century, is also here. It is in Mudejar style and has a lovely wooden altarpiece inside. It is also worth stopping to take a look at the lovely fountain, decorated with Moorish tiles. Just opposite, don’t miss the Mirador de Soportújar, with its fantastic views over the surrounding countryside and nearby villages such as Carataunas and Cáñar. You will also want to photograph one of the best-known emblems of the village, the famous fountain presided over by two witches, one an expert and the other an apprentice, preparing a magic potion in a big cauldron.

From the Plaza de Abastos we go down Calle Estación to the Fuente del Dragón fountain, whose water is said to have aphrodisiac properties and stimulate fertility. And from there it is time to rummage in our purses and wallets before we get to the Pozo de los Deseos, or wishing well, another of the most emblematic places in Soportújar. In the village, people say that if you don’t throw a coin in when you get there, bad luck could follow. So, if that’s the case, we’re not going to chance it. And we make our wishes, too.

With our duty done, we continue our walk through the lower part of the village, where we come across the Calderos Mágicos and Calle Zanjilla, which according to local people is the narrowest and most magical street in all of Spain. “You can see the witches during the day, but leave before nightfall,” warns a painted sign over Los Naranjos passageway, from where there are also lovely views over the countryside. 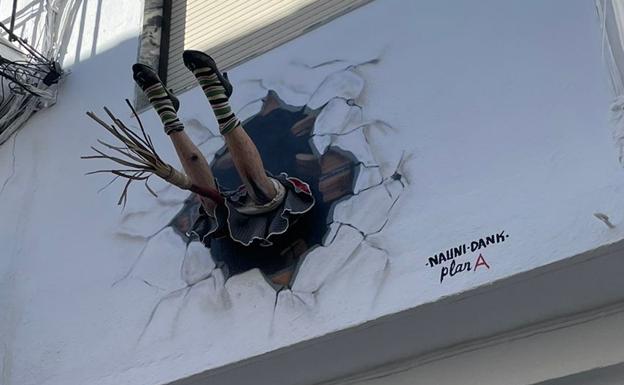 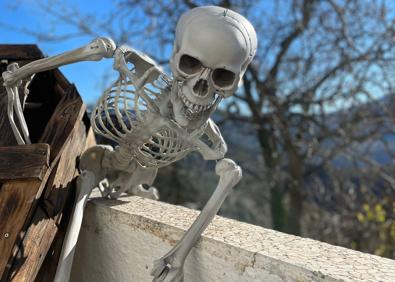 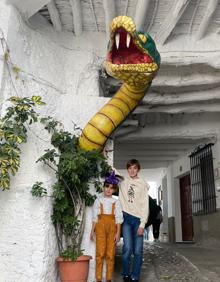 Passing through one of the characteristic ‘tinaos’, we see a large serpent coming out of one of the whitewashed façades. Of course, we just have to take a photo. In fact, it is best to keep your camera ready all the time, because there are endless opportunities for posting on Instagram. Like the Magic Broom, for example, which is brilliant for a family pose complete with a mysterious black cat – and the Black Widow, an enormous spider that guards the upper part of the village. It is also known as ‘the dream-spinning spider’. It used to be said that if a spider fell onto a candle and was burned in the flames, it was a sign that witches were nearby.

After trying unsuccessfully to solve the riddle beside the Fuente del Chorro fountain – something nobody can ever do – we arrive at one of the most spectacular stops, which is especially tempting for the smallest members of the family: the Casa de Caramelos, which resembles the gingerbread house in Hansel and Gretel, in the old water deposit in Calle Alta, and where José, our guide, says they plan to open a sweet shop in the near future.

Our tour ends with another attraction with beautiful views, the Era del Aquelarre. Local people say it was here, on the outskirts of the village, that the witches used to fly on their broomsticks to hold their nefarious meetings. Nowadays the sculptures of a skull, an owl and a cat preside over a viewing point from where, on clear days, you can see as far as the Mediterranean.

If your visit has left you wanting more, there is yet another surprise to come: Soportújar is home to the first Buddhist centre in Spain, founded by the Lama Yeshé on the Cerro de Atalaya hill and consecrated by the Dalai Lama himself. Anybody who respects the Buddhist faith even if they do not profess it, can come to O Sel Ling (it means place of clear light) for a period of retreat and isolation . From this complex, which is more than 1,500 metres above sea level and about eight kilometres outside Soportújar, there are incredible views over the Barranco de Poqueira.

Other options to continue exploring the area include a visit to other lovely villages such as Pampaneira, Bubión and Capileira. And if you like walking, the legendary GR7 passes through Soportújar, as do some other trails including the 'Sulayr' or 'Transnevada', a circular route which is ideal for a mountain bike.

The gastronomy of the Alpujarras is another good reason to visit the area, particularly the ‘migas’ spicy breadcrumb dish and the hearty ‘plato alpujarreño’, which can be enjoyed at the Taberna Romero in the main street, just beside the town hall. Bar Correíllo is another good place for a drink and generously proportioned tapas. So, may the magic be with you!