Purple tulips: spring and feminism in one bouquet

In some countries it is traditional to mark International Women's Day by gifting flowers to women; many bunches may well have travelled all the way from Andalucía

On 8 March the world celebrates International Women's Day, and in some countries it is traditional to mark the day by gifting flowers to women.

The fertile soil, warm winter weather, and efficient irrigation systems in the western part of the Cadiz province are optimal for cultivating tulips. Nonetheless this is a vulnerable flower, and only a few local companies grow them.

Mirabel Reyes is one Manuel's daughters who is continuing the family business, which employs some 30 women. She told SUR in English, “Tulip cultivation was possible thanks to international collaboration, and the active participation of Dutch specialists. In autumn lorries from Holland deliver bulbs to Chipiona to plant in November. We cultivate tulips in many different colours, shapes, and sizes."

"There is actually a variety named after a famous Spanish character," she added. "The deep pink Don Quichotte has twice won the Award of Garden Merit from the Royal Horticultural Society,” said Mirabel. Don Quichotte blooms in gardens in the Netherlands in the spring, typically peaking in early or mid-May. But in Andalucía the peak for tulips is January and February.

"A few centuries ago, scientists in Holland wanted to find out why tulips had such unique colourings. Only in 1931 was it discovered that tulip colourings were actually caused by a virus. Multi-coloured tulips are now artificially bred and we can't help but admire these new varieties developed by Dutch tulip hybridisers. This season orange tulips are in demand," said Mirabel.

By women and for women

“In many Eastern European and northern countries, gifting flowers has become a norm on International Women's Day. Tulips especially are a hit in flower shops on 8 March there. In Italy they give yellow mimosas. So far there is no special flower tradition in Spain for 8 March. But why not give a bouquet of purple tulips, for example? Purple is widely associated with contemporary feminism," explained Maribel.

"We still have some last rows of tulips in purple. They are outside the greenhouses, and we have to cover them because this February has been extraordinarily warm and sunny, and tulips like shade and cooler temperatures.”

That February morning, most of the grown tulips had been cut and the women were packaging them. Some explained that to them, tulips represented compassion and kindness. These flowers are considered a perfect way to honour women.

In many Eastern European and northern countries, gifting flowers has become a norm on International Women's Day

Last purple tulips of the season. / A. M. Saanders

Although tulips are mostly associated with spring and the Netherlands, they are believed to have originated in mountain ranges in Central Asia - the word 'tulip' is derived from a Persian word for turban.

The flowers were cultivated by gardeners in the Ottoman Empire and were actually unknown or quite rare in Western Europe until the end of the 16th century. However, some believe that tulips came to Spain much earlier, with the Moorish arrival.

Classical red tulips are ready for the Costa del Sol. / A. M. Saanders

Tulips became one of the first flowers to be grown and cultivated in Europe. They were an expensive gift in the 17th century, and bulbs were sold for very high prices. They were even used as a form of currency by the Dutch, for barter purchases.

Nowadays the Tulip remains the icon of the Netherlands. Ten years ago, National Tulip Day was founded as a prelude to the tulip season. Every January, the Dam square in the centre of Amsterdam transforms into a big garden covered with 200,000 tulips.

Most of the cultivation of tulip bulbs takes place in Kennemerland in North Holland, as well as South Holland and Flevoland. The colourful flowers can be seen in Dutch fields around April, attracting flocks of tourists.

But the demand for tulips year-round means that Dutch lorries head to south Andalucía to pick up tulips in the winter months. 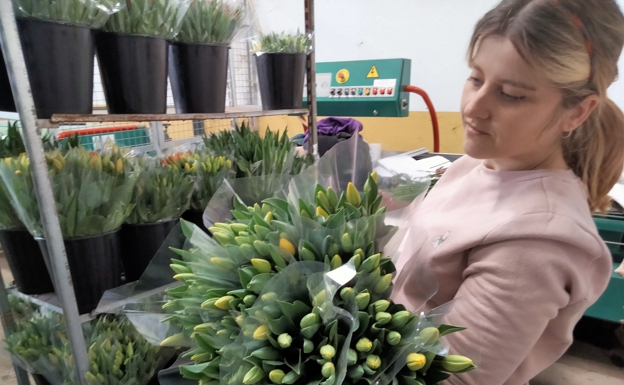 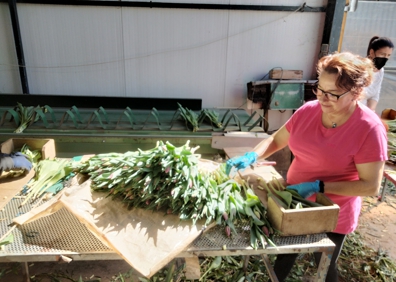 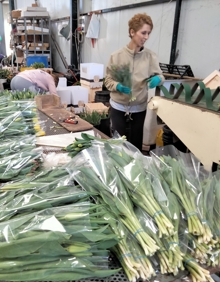 It is getting warmer, and around the middle of March tulips disappear from the Andalusian fields. Flores Miranda’s last purple tulips will be sent for sale to the Costa del Sol. Incidentally, the Dutch think that purple tulips are the perfect present if you want to wish someone a great new start. And traditionally spring is all about new beginnings.