The four Spanish royals look on, from the second row. / AFP

Spain's King Felipe reunited with his father at Westminster Abbey

Felipe VI and Queen Letizia were seated next to the emeritus king and queen, Juan Carlos and Sofía, at the funeral of Queen Elizabeth II

Spain's King Felipe VI appeared in public with his father, emeritus king Juan Carlos, for the first time in two years at the funeral of Queen Elizabeth II in Westminster Abbey this Monday, 19 September.

The funeral seating plan gave rise to an unexpected and historic photograph when King Felipe and Queen Letizia were seated alongside Juan Carlos, who lives most of the time in Abu Dhabi, and the king's mother, the emeritus queen Sofía.

Juan Carlos's presence at the funeral caused some controversy in Spain, due to the scandals that surrounded his move to the United Arab Emirates in 2020.

The four were seated in the second row, in an area reserved for representatives of Europe's royal families, alongside King Harald V and Queen Sonja of Norway. 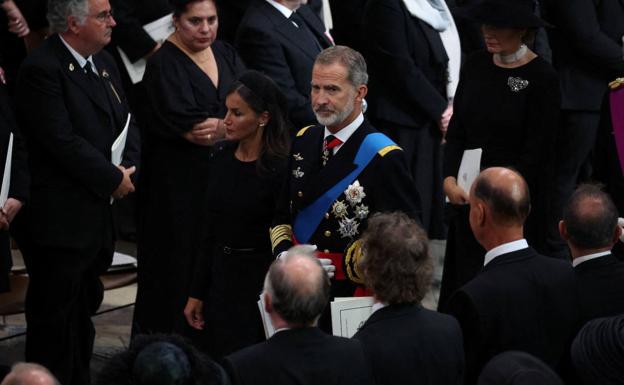 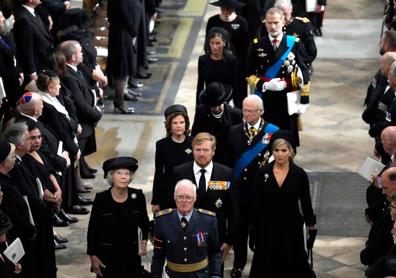 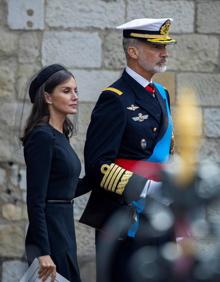 King Felipe and Queen Letizia with other European royals in Westeminster Abbey. / AFP

In front of them were Queen Margrethe of Denmark and her son Frederick; and King Willem-Alexander, Queen Máxima and Princess Beatrix of the Netherlands.

The third pew in this European royal section was occupied by King Philippe and Mathilde of Belgium; the Grand Duke and Duchess of Luxembourg, Henri and Maria Teresa; and Albert and Charlène of Monaco.

The last time King Felipe was seen in public with his father was at the funeral of Juan Carlos's sister, the Infanta Pilar, in 2020.

In May this year Felipe and Juan Carlos met privately in Madrid when the emeritus king was visiting Spain for a regatta.