This was the biggest protest of its type in Madrid. / R.C.

A desperate SOS from Spain's rural world: "if the countryside dies, the cities don’t eat"

Thousands of growers, livestock farmers, fishermen, hunters and people from the world of bullfighting took part in a demonstration in Madrid on Sunday

It was a cry for help in an unprecedented protest march. Thousands of people – over 100,000 according to initial estimations and 400,000 according to the organisers – crowded into Madrid city centre on Sunday in the rural world’s biggest demonstration ever. The organisers, the 20Mrural platform, insisted they didn’t want charity, they just wanted to be able to continue with their own way of life.

The protesters shouted that the rural world is dying, asphyxiated for years and especially in recent months by rising prices for fuel, electricity, raw materials and the drought. There are now two additional problems: the shortage of cereals for animal feed because of the Russian invasion of Ukraine, and the hauliers’ strike which is preventing their products getting to their usual markets.

Few demonstrations in Spain have been supported by so many different groups as this one: growers, livestock farmers, fishermen, hunters, people from the world of bullfighting, small rural tourism businesses, bee-keepers and more from all over the country gathered to bring the centre of the Spanish capital to a halt.

There were tractors, carriages, horses and donkeys, people brought chickens, cows and sheep, and protestors carried placards saying “The rural world is waking up”. Although the 20Mrural platform says it is apolitical, there were plenty of politicians from opposition parties in evidence, including Cuca Gamarra, Fernando López Miras and Esteban González Pons from the Partido Popular, Santiago Abascal from Vox and Edmundo Bal, of Ciudadanos. 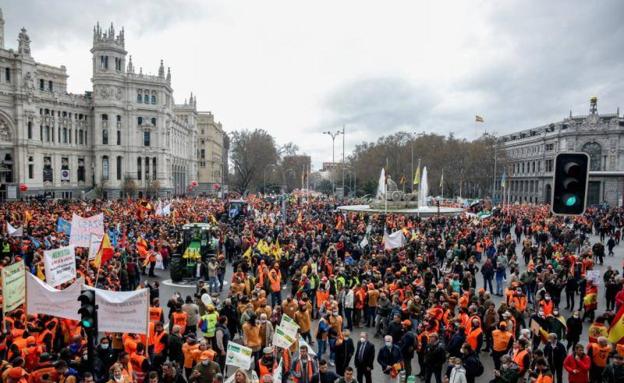 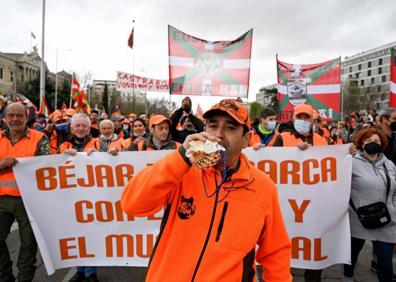 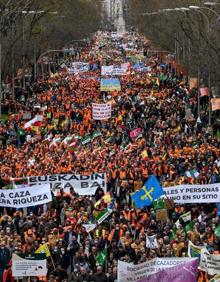 “We want solutions, not grants,”

But apart from those criticising the government, there were desperate calls from people who see no way of carrying on unless there are changes to laws and the way of looking at the economies of the countryside, who wanted to draw attention to the knock-on effect that problems in the rural world have on those in cities. “If the countryside dies, the cities don’t eat,” read one placard. “We want solutions, not grants,” said another.

The four kilometres from the Plaza del Emperador Carlos V square, opposite the Ministry of Agriculture in Atocha, to the San Juan de la Cruz fountain outside the Ministry of Ecological Transition, were full of colour and spirit, but the atmosphere was not festive in the slightest. The grey and stormy sky above looked ominous; it seemed the perfect reflection of the protesters' mood.