About 200 vehicles park long-term in the space next to the Martin Carpena sports arena. / FRANCIS SILVA.

A city on wheels on the edge of Malaga

The esplanade by Malaga’s Martín Carpena sports arena is full of families living a nomadic life, double the number for whom the council prepared the parking area. “It’s wonderful in Malaga,” they tell us

Teresa Reina, who is from Barcelona, has just got out of the shower of her camper van, but she approaches us with a big smile, evident despite her face mask. “Malaga is fantastic. I love the city, the weather, the people and especially the fried fish!” she tells us. As she sits in the sun, her nextdoor neighbour, Juan Navarro, unhooks his small car down from his motorhome’s trailer, ready to run a few errands. “We’ve been here for a couple of months now; it’s the best place to spend the winter,” he says.

The nomads of Sacaba: “We are a community, here”

A few metres away, Patrick has just parked after filling his tank of drinking water, and is chatting with some friends. “We’re almost a family here,” he says. Two are Belgian, like him, and Agnes has come from France “again” to spend some time on the “wonderful Costa del Sol”.

They are all from different places, but for the past few weeks they have been residing in the Martín Carpena motorhome park, because that is what the esplanade beside the sports arena of the same name has become for a large community of nomads.

“Living like this, you can wake up where you want to every morning,” Teresa says. And for the moment, and the foreseeable future, Malaga is where she wants to be.

She is by no means alone. Although the area that the council prepared last year to get these vehicles off the nearby Sacaba beach was planned as an L-shape with room for 100 motorhomes, there are about 200 now, taking up nearly all the space and making it difficult for basketball fans to park on match days.

Although the city hall says nobody should spend more than two or three days there, most of them do. “It has been full every day in recent months,” says Juan, from Catalonia, who has owned three motorhomes in 15 years and has spent five years travelling around Europe - “although not so much now because of Covid”- but staying in Andalucía for the winter. 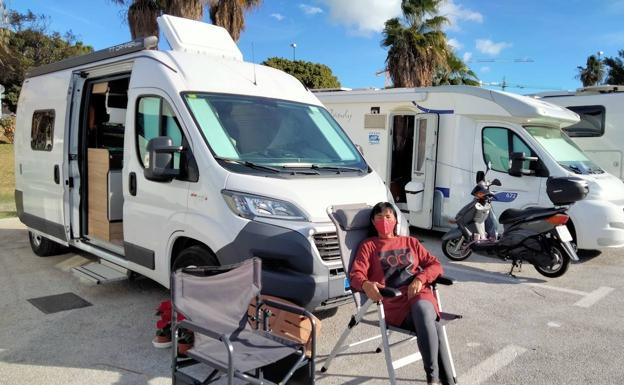 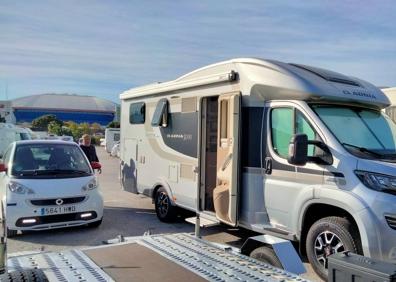 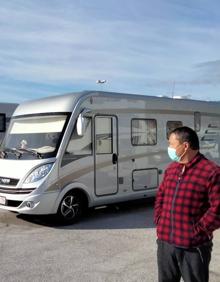 Teresa, Juan and Guillermo alongside their motorhomes. / F.J.

Carlos García and his wife, however, are both local; four years ago they changed their lifestyle completely, more from need than for pleasure, but now they wouldn’t change back for anything. “We bought the caravan for 2,000 euros because otherwise we would have ended up living on the streets, and we’re still here,” they say. They spent some time at Sacaba, and are now parked by the stadium.

“It’s much better here, but there are a lot of people now,” they say. The noise from the motorway is a disadvantage, but on the other hand there are good road connections, with a bus stop, metro station and large stores for food shopping nearby.

“It’s like a village,” says Guillermo Ruiz, who is from the Canary islands and lives in a motorhome due to circumstances of life. “More people live like this now, from pensioners to travellers, and also a lot of divorced people who can’t afford to pay rent,” he says. He points out that these motorhome owners provide business for local shops, and he hopes the council will soon provide rubbish bins and improve the water connections.

As we talk, a Local Police car passes by on one of its regular patrols, and then an Amazon van arrives. The delivery driver gets out and asks for someone called Pedro. “Oh yes, his van is down there,” he is told, helpfully.