More than 1,300 evacuated and another thousand prepare to leave their homes due to advance of Sierra de Mijas fire

Fifteen Plan Infoca aircraft and more than 100 specialist firefighters are tackling the blaze, which is visible from practically the entire length of the coastline in the province. The Junta has activated the Level 1 Emergency Plan for Forest Fires

Flames and smoke from a forest fire have put residents in Malaga province on alert, this Friday 15 July in this case in the municipality of Mijas. Just after noon residents reported a new blaze in the Sierra de Mijas. From the Plaza de la Constitución in the centre of the town centre, a column of black smoke and flames could be seen rising from the mountains, in the area known as Cañada de Los Jaenes. 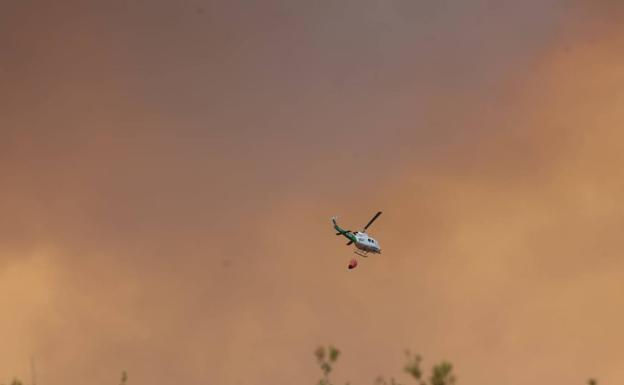 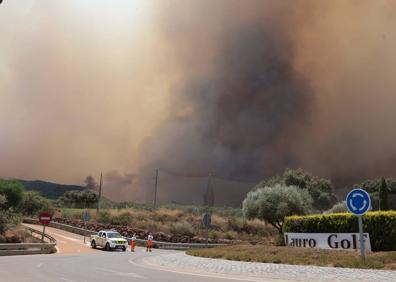 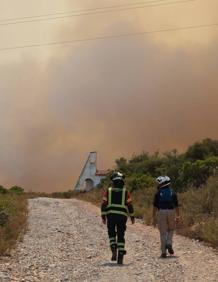 The Junta's Plan Infoca specialist forest fire brigade said it was located in the El Higuerón zone. Helicopters and ground crews were quickly on the scene but the Andalusian regional government delegate in Malaga, Carmen Casero, activated Level 1 of the Forest Fire Emergency Plan at 1.25pm.

Galería. Photos of the latest Sierra de Mijas fire, visible from many points on the Costa del Sol

The Junta de Andalucía's spokesperson, Elías Bendodo, said that the Andalusian Emergency Group (GREA) had been deployed and that fifteen aircraft and more than a hundred ground troops were already working in the area.

Bendodo said there are already more than 1,300 people who have had to leave their homes as a precaution and another thousand will have to do so shortly, according to the Junta spokesperson, between Alhaurín de la Torre and el Grande. The first data points to 800 hectares of land being affected by the fire.

"We have mobilised all possible means to try stop it evolving badly. We have to take advantage of daylight hours of light and little wind to try to suffocate it," said Bendodo speaking in Malaga.

Meanwhile. the 112 Andalucía emergency services control centre is recommending all people in the area close to the fire to close doors and windows to prevent smoke from entering their homes.

Shortly after the Junta’s spokesperson made the statement, the wind increased in the area and changed direction, which is making the work of the firefighters very difficult. “We have had to vacate a rural hotel as a precaution, but now the wind has changed and is moving in the direction of Alhaurín el Grande. Our fear is that the fire would move to Pinos de Alhaurín, but for now it seems not,” Pablo Montesinos, Alhaurín de la Torre’s councillor for Security told SUR. The command post for the firefighting plan will be located in the sports pavilion in Alhaurín el Grande, and the actions will be coordinated from there.

The fire is also already affecting traffic flow in the area. The Directorate-General of Traffic has said on its website that the A-368, which connects Mijas Pueblo with Benalmádena, is cut from kilometre 0 to 5 in both directions due to smoke and dust caused by the fire. In addition, the 112 Andalucía reported that the A-404 road from km 9 to km 13 in both directions at Alhaurín El Grande is also closed to traffic. The tailbacks on the road are already affecting as far as Malaga city, with several kilometers of slow-mving traffic. The DGT also reports that, in relation to the fire, there are tailbacks on the A-7 and AP-7 from La Cala de Mijas to El Higuerón, in the direction of Malaga.

This is the second forest fire in Malaga province in just 24 hours. This morning the Infoca brigade declared the fire reported yesterday, Thursday, in Casabermeja to be under control. Helicopters and ground teams in the area continue their work to fully extinguish it.