The event, which takes place in Estepona this weekend, will raise funds to continue improvements of a school in Uganda. Professionals get together this Friday to discuss the real estate sector at a pre-tournament conference

More than one hundred companies and professionals have registered to take part in the III Solidarity Padel Tournament organised by the Costa del Sol's real estate sector, which takes place in Estepona from Friday 3 until Sunday 5 June .

The registration fee for the tournament, organised by Nvoga Marbella Realty, has already raised more than 70,000 euros, which will be donated to the Building the Future association to continue with the improvements of the Rwenzori Focus school in Uganda.

Building the Future, an organisation that focuses on helping associations that work with children, began the expansion of the school in 2019, but the work had to be postponed the following year because of the pandemic. The charity has since made considerable progress with the school's facilities. Last year, the organisation was able to complete the construction of a new building to house primary children who were still receiving classes in a wooden facility.

Warming up for padel with football 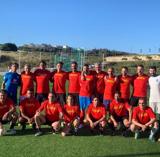 Activities began on Wednesday with a friendly three-way football tournament between representatives of the real estate sector and veterans of local team CD Estepona. The real estate professionals were divided into two teams, Spain (in the image on the left) and Rest of the World (right). The mini-tournament was won by the Rest of the World, with the CD Estepona veterans finishing runners-up.

The first Building the Future tournament was held in Marbella in 2019.

A percentage of the money raised at this year's event will go to other local charities such as Ubuntu, Paula y la Fábrica de Médula, the Estepona branch of the AECC Spanish cancer organisation, the Cesare Scariolo Foundation and the Andalusians with Ukraine project through the Victoria Kent Association.

José Carlos León, president of the Building the Future association and CEO of Nvoga Marbella Realty said he was "overwhelmed" with the response to this year's tournament.

"I wish to thank all the companies and anonymous people who are doing their bit to help these charitable causes," he said.

The president also showed his gratitude to the Villa Padierna Racquet Club, the venue for the tournament, and also to Estepona town hall for its support.

The padel tournament, which is open to all sectors of real estate, including estate agents, developers, architects, decorators and builders, is being launched with a real estate conference held in the Auditorio Felipe VI in Estepona today (Friday).

More than 300 professionals from the sector are taking part in the conference, during which different topics related to the current situation of real estate on the Costa del Sol will be addressed. These include the new challenges facing the market, branding and increasing construction costs.

The knockout matches of the padel tournament take place throughout the day on Saturday, while visitors can also enjoy complementary activities such as yoga classes, physiotherapy sessions, a fashion show and music.

The finals of the tournament will be held on Sunday, followed by an award presentation ceremony.