Sunil Tharani: 'We are celebrating the triumph of good over evil'

Diwali, the Hindu religious festival of lights, is being celebrated this week on the Costa del Sol. President of the Indian/Hindu community, Sunil Tharani, tells SUR in English about Diwali, as well as the history of migration and the Hindu temple in Benalmádena

Diwali, a Hindu religious festival of lights, is being celebrated on the Costa del Sol this week. The festival usually lasts five days, and the main day is celebrated this Monday (24 October) in the Hindu temple in Benalmádena. President of Indian/Hindu community, Sunil Tharani, tells SUR in English about Diwali, as well as about the history of migration and the Hindu temple itself

Sunil Tharani at the Hindu temple in Benalmádena. / SUR

Sunil, why is it that the Diwali you are celebrating in Benalmádena is the most visible on the Costa del Sol?

Diwali, the festival of light, is a holiday that celebrates the triumph of good over evil. It is celebrated all over India in October or November to commemorate the day Lord Rama returns victorious to his Kingdom in Ayodhya after killing the demon Ravana, who was King of Sri Lanka. It is not really the New Year of Hindus, but is considered as the most important Hindu festival. But many shops and offices open their accounts books symbolically as the financial New Year since it is also the day of Mata Laxmi, the Goddess of Fortune and Prosperity.

"In recent years we have had the immense pleasure of celebrating Diwali in Torremolinos and Benalmádena. Both town halls have been equally supportive to our community"

In recent years we have had the immense pleasure of celebrating Diwali in Torremolinos and Benalmádena. Both Town Halls have been equally supportive to our community. This year, on 22 October, the Mayor of Torremolinos inaugurated the 'Happy Diwali' lights in Calle San Miguel Torremolinos. Last Saturday we also celebrated Diwali at the Centro Cultural Pablo Ruiz Picasso with performances from our local talent. The community is gathering in the Hindu Temple in Benalmádena for prayers on 24 October at 8.30pm for the main day of Diwali. 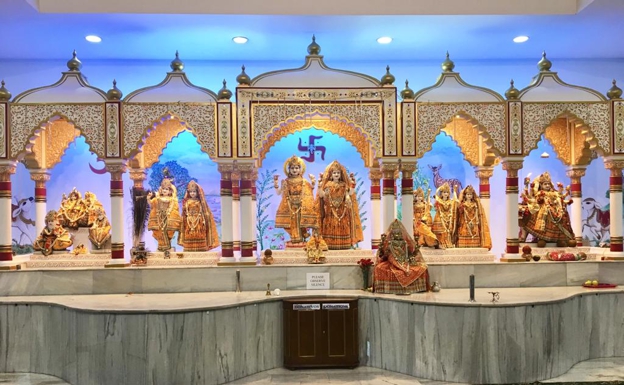 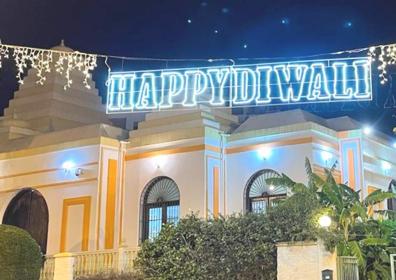 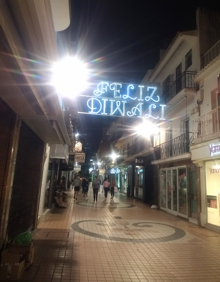 Why was the Hindu temple built in Benalmádena despite the majority of Indians being in Torremolinos?

The mayor of Benalmádena was kind enough to lease the land on which the Hindu temple is built. Besides, the Hindu community of Malaga is spread around Malaga, Torremolinos, Benalmádena, Fuengirola and Marbella. Hence it is very convenient for the numerous Hindu families who live and have their businesses in all these towns to have a location that is centrally positioned for everybody. We highly appreciate the warmth and affection of the local people who make us feel as one of this town and country.

"Before the inauguration of the Hindu temple in Malaga, the closest was the one in Gibraltar which opened in 1993, although it was not officially inaugurated by the governor of Gibraltar until 2000"

If I am not mistaken, the Canary Islands were the first to welcome Indians, which initiated the start of migration to Spain...

The Indian community is the result of various forms of migration to Spain. As for companies of Indian origin in the Canary Islands, their presence dates back to 1880. It is thought that immigrants who became entrepreneurs arrived with British passports. The choice of the Canary Islands resulted from various business opportunities there. In addition, the archipelago is not far from other Hindu settlement areas, such as Gibraltar and the Maghreb countries.

After declaring Ceuta and Melilla as free ports, Indian businessmen set up trading houses and retail store catering. Their businesses flourished for several decades due to clientele from military bases located in these Spanish enclaves. By the mid-seventies, in both Ceuta and Melilla, Indians owned over two hundred businesses. With the liberalisation of import policies introduced in the 80s, Indian businessmen started to search for new opportunities. Eventually, they shifted their focus to other cities like Malaga, Seville, Madrid, Valencia, and Barcelona, not forgetting the Canary Islands where the overwhelming majority of Indians in Spain live.

"Anybody can attend the festivities we celebrate, thus trying to keep our traditions and culture alive in this far-away land we have now made our home"

Back to the temple in Benalmádena. There are temples on the Costa del Sol with restrictions to enter. Is the Hindu temple of Benalmádena open to anyone who wants to visit?

Of course. We would like more people to come and see it, thus learning more about our culture and religion. The Hindu temple is located in Arroyo de la Miel, behind La Paloma Park. Its architectural style was inspired by the Indian models of the temples of Khajuraho in the state of Madhya Pradesh, India, and designed by architects José Manuel García Pérez and Félix Naveira Lampérez. The temple stands on a cross-shaped platform set in a small garden. The sikhara is the main element of the building and is topped by an amalaka, reaching a height of 14 metres. The exterior decoration is based on simple stepped and geometric forms. Inside, the main altar is framed by pillars. It is open to all communities and religions as we Hindus believe the whole world is one big family. Anybody can attend the festivities we celebrate, thus trying to keep our traditions and culture alive in this far-away land we have now made our home.