The new semi-permanent collection, A Time of its Own, is made up of over a hundred pieces. / SALVADOR SALAS

Un Tiempo Propio (A Time of its Own) is the significant new semi-permanent collection at the Malaga Pompidou Centre, with over one hundred works on show.

The renewed central collection was unveiled last week by the deputy director of the Georges Pompidou modern art museum in Paris, Brigitte Leal, who also came to Malaga with an unexpected but happy message. Leal revealed that the Malaga branch will take on much greater international prominence for the Pompidou in the next few years as the famous Paris headquarters temporarily closes for refurbishment.

"The Pompidou Centre [in Paris] opened in 1977 and is in need of some major technical renovation. As we close for two or three years to carry out the work, Malaga will represent Pompidou abroad and in Europe," said Leal, who added that the iconic, colourful cube in Malaga's port will be the symbol of "our art collection at Pompidou, and the message that the museum wants to convey through culture".

Leal explained that, although the art centre also has another satellite base in Metz, in the northeast of France, the Malaga branch - which is celebrating its seventh anniversary this year - is the one to have been chosen instead to portray Pompidou to the world while Paris is closed.

According to the plans announced by the Pompidou, the central building in Paris was scheduled to close for refurbishment in 2023, but this has now been put off until 2024, after the Olympics are held in the French capital. 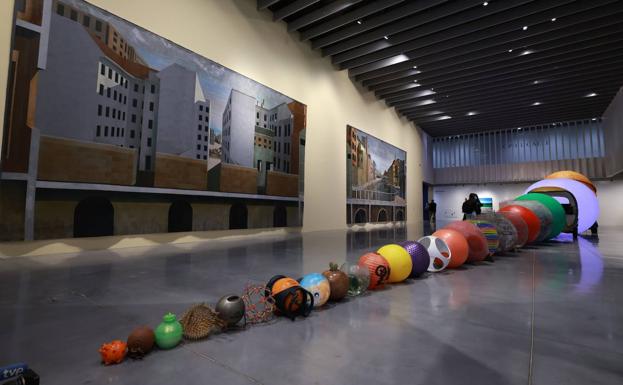 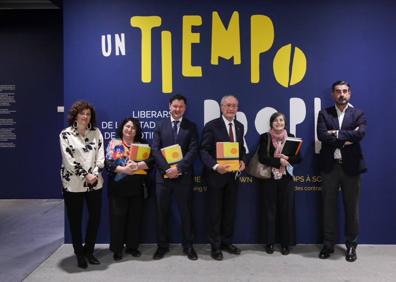 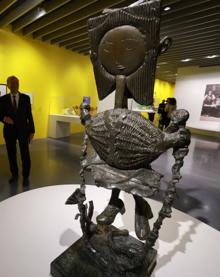 The inauguration of this Malaga exhibition, which was attended by the director of the municipal agency that manages the Pompidou, José María Luna, and the Caixabank sponsors, marks Brigitte Leal's last trip to Malaga as the official representative of the Pompidou before she retires.

She expressed the gratitude of the successive directors and presidents of the world-famous Parisian gallery to the team at the Malaga gallery and the city council, saying that "without your personal commitment to the centre, it would not exist today, and it has been thanks to your passion and faith in culture that it has been able to thrive".

To reinforce the plan to showcase the Malaga museum much more internationally, special attention has been paid to curating A Time of its Own, the new core exhibition unveiled last Thursday.

This collection, whose subtitle is 'Free yourself from the ties of everyday life', challenges visitors to take a step back and rethink their daily lives after everything had to stop because of the pandemic and lockdown.

"This exhibition was born from the conviction that - over the past few years we have gone through - every one of us, child or adult, has had to adapt and build a different relationship with time, either due to a lack of or an excess of it," explained the curator of the exhibition, Valentina Moimas. She has divided it into six blocks, with some sections designed to be fun and playful, while others encourage deeper reflection on visitors' personal experiences.

From playful to introspective

The voice of Ella Fitzgerald singing All My Life accompanies visitors entering the exhibition. The first room explores the joy experienced during leisure time, illustrated by Pablo Picasso's sculpture Girl with a Skipping Rope - a work which, despite being made of bronze, manages to convey the sensation of a figure suspended in midair. The theme of childhood is also presented with toy sculptures by Philippe Starck and Hans Brockhage, while Aguste Herbin's petanque players and Raoul Dufy's Dance at the Moulin de la Galette explore leisure time and adulthood.

The second room has a holiday theme. Works by Braque, Derain and Picabia invite visitors to escape to new places, and according to the curator, to "celebrate not only the beauty of landscape but also different forms of rest, away from the hustle and bustle of daily life."

The 'ties of everyday life' mentioned in the exhibition's subtitle are particularly prominent in the third room, titled Time for Introspection, which shines a light on life at home. Henri Matisse's Reader on a Black Background from this section is one of the main images use to represent the new collection.

The following two rooms continue with this focus on the interior, exploring dreamlike states with pieces such as Hollywood Dream, by Jean Cocteau, which depicts a boy sleeping with a lion.

Emmanuel Lagarrigue's installation explores the world of inner thoughts with a tank of jellyfish with speakers in their tentacles, producing ethereal sounds.

The journey through the exhibition becomes increasingly sensorial, progressing to smell in another spectacular sculpture installation of lycra stalactites that smell of cloves, turmeric or pepper.

The final room of the exhibition invites a return to reality, with large architectural pieces, which include recently restored oil paintings by Arduino Cantafora, The Other Berlin. These convey a profound urban solitude with their five-metre height, which contrasts with the amusing and colourful installation by Cuban Wilfredo Prieto, made up of 25 spheres of everyday objects that progressively increase in size - from a small toy to a giant orange-shaped kiosk - to form the work Avalanche. This piece is destined to become an icon of the new semi-permanent collection that will be on display until October 2023.