Feminist revolution at the Picasso museum

"If you want to reach everybody, you have to create something small and personal because then they are going to understand you". These words of advice come from artist Paula Rego (Lisbon, 1935) and were addressed to her son Nick. Not only has he never forgotten them, but they have shaped his career as a film maker.

Rego reflects this message in her oil paintings, watercolours, drawings, collages and etchings. The works are like an autobiography, through which she tries to understand and reinterpret herself, and paradoxically achieves that universality to which she was referring.

The new temporary exhibition at the Picasso Museum in Malaga features Portugal's most important living artist, who has revolutionised the way women are portrayed in contemporary art.

Her motivation to subvert the role traditional assigned to women is what has made Paula Rego's work so renowned. The exhibition spans six decades of her work, which are both committed and non-conformist, showing how she has used figurative art to blow apart the visions of how women should be. However, recognition of her talent did not come until the 1990s, when she had been living in London for nearly two decades.

"She spent her life competing in a world dominated by men,. On top of that, of course, she was not British," said her son Nick Willing at the exhibition's inauguration. He apologised on his mother's behalf for her absence; she is now 87 and after an operation for thrombosis in her legs, her doctors had forbidden her from making the trip. 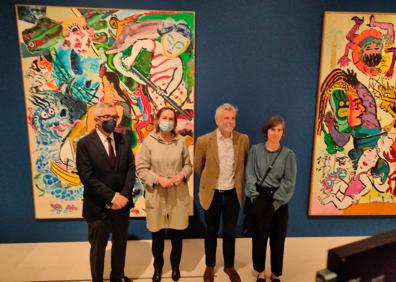 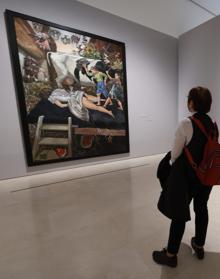 Rego's encounter with Pablo Picasso resulted in a clash between two people who were united by art and a mutual loathing of dictatorships, but who held very different positions on the way women are represented, as well as the way that Picasso treated his wives.

Despite this, Nick Willing said his mother had Picasso in mind when she said that "all children are great artists, the key is whether they continue to be so when they grow up". Paula Rego definitely did, and her son attributed her constant renewal and connection with the public to the fact that her works tell stories. "She is a story junkie," he said.

José Lebrero, director of the Picasso Museum, explained that with this exhibition the museum is highlighting a "view of the world which is different to a hegemonic one", and one that had not been recognised and visible until recently.

He also noted the current relevance of Paula Rego's works, because this exhibition coincides with her participation in the 59th Biennale of Venice with her 'Milk of Dreams'.

Portuguese president Marcelo Rebelo de Souza made a special visit to the Picasso Museum for the inauguration of the exhibition, and listened attentively to the explanations given by the curator, Elena Crippa.

The president expressed how much he admired this artist's symbolism. He also pointed out to those around him the series of Rego's paintings about abortion, raising awareness for the struggle to legalise abortion in their countries.

The president of Portugal, Marcelo Rebelo de Sousa, at the inauguration in the Malaga Picasso museum / fRANCIS SILVA

A display of "friendship" between countries, for the president of Portugal

International recognition of Paula Rego's works was confirmed at the highest level with the visit from Portuguese president Marcelo Rebelo de Sousa to the Picasso Museum this week.

Although the artist was unable to be present due to having undergone surgery recently, he paid tribute to her by describing this new temporary exhibition as "a unique moment of friendship between two countries, displayed through her brilliant work.

It is an honour to be here in Malaga for the inauguration of a display by such a genius of Portuguese culture," he said.

The president was accompanied by "Nicki", as he affectionately called Rego's son, Nick Willing, together with the mayor of Malaga, the regional government's Minister of Culture, Patricia del Pozo, and the ambassadors of both countries, João Mira-Gomes of Portugal and Marta Betanzos of Spain.