The head teacher of the school, Mari Ángeles Pérez, shows some of the damage / e. cabezas

The José Luis Villar Palasí primary school in Vélez-Málaga, known as 'Zona Norte', is to be closed as of this week by order of the Junta de Andalucía, following the detection of worsening structural cracks throughout the building. The school opened in 1973 and currently has 40 teachers and 550 pupils, who will need to be moved to different schools in the town.

The cracks appear in most of the 24 classrooms, as well as corridors, the canteen and the gym, among other rooms. The problem is not new as the school caretaker explained to SUR explained, adding that it actually started 40 years ago: "We have been monitoring them, covering them plaster, repairing them in the summers and holidays, but recently we have noticed that they have increased in number and size," said the member of staff. The hypothesis of the regional government’s technicians is that the drought has aggravated the movements of the ground.

Head teacher Mari Ángeles Pérez explained that the 550 pupils will be transferred to three other schools in Vélez-Málaga starting on Thursday 17 November. The infants and children in years one and two will go to the Augusto Santiago Bellido or 'Reñidero' school, while those in years three and four will be relocated to Nuestra Señora de los Remedios, known as 'Zona Sur'. Pupils in years five and six will go to La Gloria school. "We have to coordinate and prepare the whole transfer, with families and teachers, organise the classrooms, school meals, the breakfast club and transport," said Pérez.

The Junta will now have to evaluate the structural situation of the building and come up with a solution. As a result, the teaching staff do not yet know when they will be able to go back to work. "The drought is making the readjustment of the site more difficult," said the head teacher.

Vélez-Málaga’s education councillor Lola Gámez has criticised the way the regional government has gone about closing the school. "We have been asking the Junta for years for a solution to a structural problem with the cracks, it is not a matter of maintenance of the building, it is major improvement," she argued.

Parents of pupils at the school also expressed their “annoyance” over the “confusion and uncertainty" generated "through the media". Vice-president of the parent-teacher association, Ampa, Mari Ángeles García, told Cadena Ser radio in the Axarquía."If it is the decision taken by the technicians and it is for safety reasons, we will have to accept it, we hope it will be for the shortest possible time." 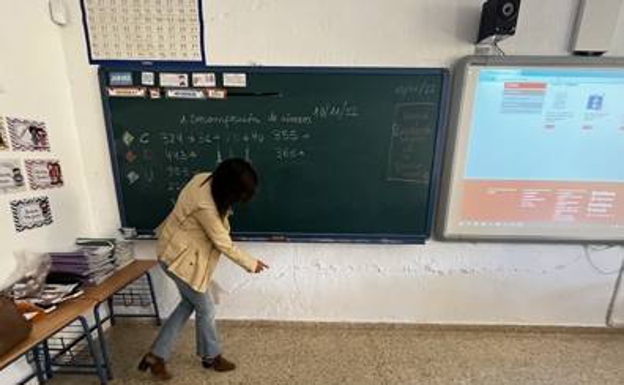 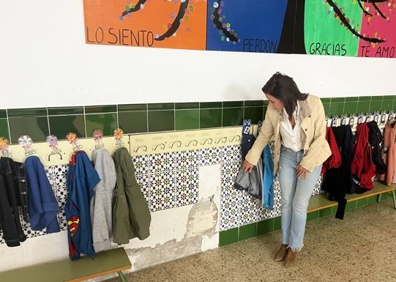 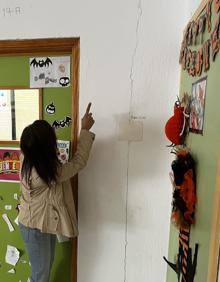 Head teacher Mari Ángeles Pérez points to cracks in the walls and plaster coming off in classrooms and corridors / E. Cabezas