More than ten thousand people crowded into the fairground to see the controversial Catalan artist in a free event, which the mayor ordered to be cancelled just an hour into the performance

Crowd surges, stampedes, people climbing on the structures, acts of vandalism and panic attacks; this is how last night’s Morad concert to mark the last night of Torre del Mar’s fair ended. The free event attracted "well over" 10,000 people according to police sources.

Such was the level of "lack of control and safety" in the area, with just five Local Police officers and a number of National Police agents, that the mayor, Antonio Moreno Ferrer, ordered the event to be suspended at 1.05 am, as SUR has been able to confirm, just an hour after it had begun.

Sources from the 112 Andalucía emergency control room explained that from 12.30am calls began to come in "for an uncontrolled capacity, with people climbing in places they shouldn't have, in booths and bathrooms, on the tarpaulins, causing acts of vandalism, and numerous people with panic attacks".

The Red Cross attended to those suffering the attacks, with no record of anyone being taken to hospital. Police sources said that a young woman fell from a height of several metres when she climbed onto the structure of the stand to see the artist, and that there were also several brawls among the crowd. They also claimed that before the concert there was a mass fight involving knives, which resulted in several arrests and injuries of varying degrees.

The local secretary of the SIP-An - the main union representing Vélez-Málaga’s Local Police unit, Jesús Sánchez, regretted that "they only had five officers in the area, with the support of the National Police". Sánchez went on to say, "The number of people was uncontrollable, the planned capacity, which was 10,000 people, was exceeded, and we will demand accountability because the security and emergency plans were not complied with.”

Dozens of videos are circulating on social networks in which the public can be seen climbing on the metal structures of the stand and lying on the tarpaulins in order to get a better view of the singer, many of which broke under the weight of people clambering on to them. Complaints and criticism for the lack of security measures put in place by the town hall are circulating on social network sites.

"I was also at that concert and people stampeded twice. The first time because they threw a smoke bomb. The second one I don't know. Zero action by the @police. I wasn't expecting much, but the reality has exceeded expectations", Sandra Vilches wrote on her Twitter profile.

"Drugs and their consequences, there was no stabbing or anything weird apparently, just the lack of control of so many people", said Álex Infante.

Manuel Bascón wrote, "My God ... if nothing has happened it's because there was someone up there watching".

Cadena Ser radio in the Axarquía reported that a dozen arrests were made and that a report by the Local Police stated that there were "not enough people" to control the situation, with stampedes, aggressions, robberies and crowd surges. SUR has tried, without success so far, to obtain an assessment from Moreno Ferrer and the deputy mayor of Torre del Mar, Jesús Pérez Atencia on what happened last night at Torre del Mar’s fair. 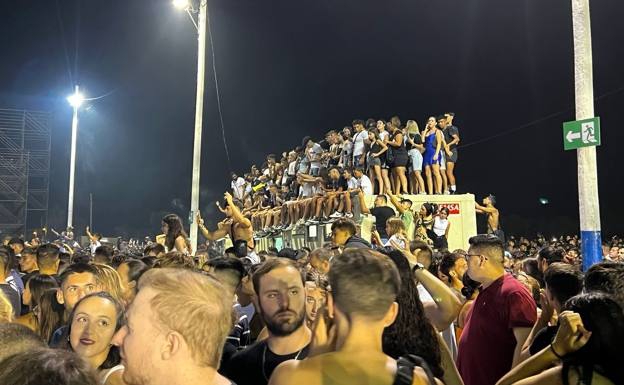 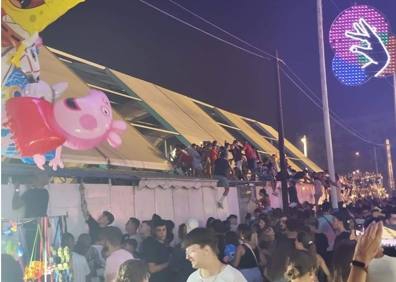