The custom of egg decoration was brought to this area by immigrants who settled near Seville in the 18th century; one town holds a festival every Easter Sunday

The Easter tradition of decorative eggs in Europe dates back as far as the 13th century and can be traced to England. In 1290, the English king, Edward I, painted and decorated 450 eggs and gave them out as gifts for Easter.

Andalucía has its own tradition of egg decoration that was brought by immigrants who settled in the Seville area in the 18th century. One town, Cañada Rosal, continues the festival every Easter Sunday.

Many cultures around the world hold the belief that the egg is a sign of new life, fertility and rebirth. This symbolism might originate in the ancient Persians, Hindus, Egyptians, and Phoenicians. They believed that the world and life itself began with a giant egg.

The practice of decorating eggshells is quite ancient as well. For example, decorated, engraved ostrich eggs that were found in Africa, are 60,000 years old. However, the custom of the Easter egg is thought to have been created by Christians of Mesopotamia, who later spread it through the Orthodox Churches into Eastern Europe.

During the Middle Ages, the Easter egg custom arose in Western Europe. Western Christians were prohibited from eating eggs during Lent, and only with the arrival of Easter, were they allowed to eat them.

The English king, Edward I, is considered to have popularised the Christian practice of dying eggs in Europe. The monarch reigned from 1272 until 1307, and, in 1290, he paid one shilling and sixpence for the decoration and distribution of 450 so-called pace-eggs or paste-eggs (from a dialectal form of Middle English for Latin 'pascha' -'Easter'). All of them were to be coloured or gold-leafed and given to members of the royal household.

It appears that one of the reasons why Easter eggs started to be coloured was to enhance their value. Traditionally in England, eggs were boiled with onion skins to make their shells look like mottled gold, or other natural substances such as alder bark and oak or beet juice. They were also wrapped in flowers and leaves first in order to leave a pattern. 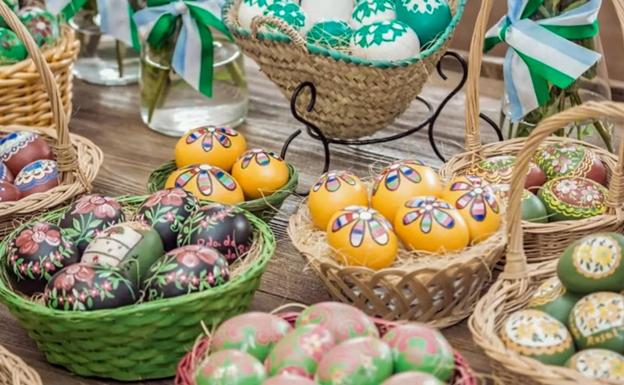 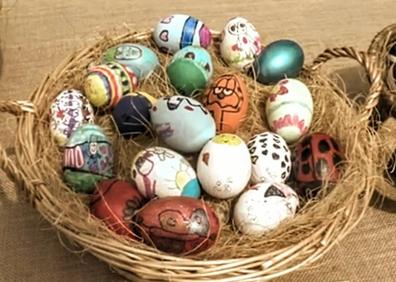 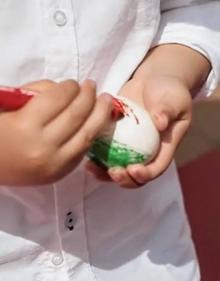 A unique place in Andalucía

It is well-known that Easter in Andalucía is all about religious celebrations and Semana Santa processions. But few know that there is only one place, Cañada Rosal, where Easter Sunday is celebrated with painted eggs.

This small agricultural town with about 3,000 inhabitants is located in the heart of La Campiña region, which borders the provinces of Seville and Cordoba. Cañada Rosal was founded by King Carlos III at the end of the 18th century along with other settlements in deserted lands in Seville, Cordoba and Jaén - with mild winters and sweltering hot summers. Cañada Rosal was populated mostly by German and French settlers who brought not only foreign surnames and unusual features but also the tradition of decorated eggs for Easter Sunday that was founded about 250 years ago.

The Colonial Festival of Painted Eggs (Fiesta Colonial de los Huevos Pintados) takes place every Easter Sunday. It became firmly established in the town about three decades ago when the association 'Amigos 27 de agosto' took over the organisation of the event.

On 17 April, Easter eggs painted with traditional motifs will be on display on the Colonial Market in the Plaza de Santa Ana where various products will be also offered for sale and tasting - from colonial potaje (stew) to German sausages.

Over 500 hard-boiled eggs are being prepared to be given for free (together with paints) for anyone who goes to the event. In Cañada Rosal children actively participate in egg painting. Small kids paint them directly in the square on Resurrection Sunday while the baskets of eggs decorated by students from different schools in the municipality are exhibited for evaluation.

Traditionally there will be lots of music and dance. SUR in English was told by the organisers that the festival of painted eggs is one of the most eagerly awaited events in Cañada Rosal, and they look forward to welcoming guests from other provinces and especially foreigners from the Costa del Sol, for whom painted and decorated eggs are as much a part of Easter Sunday celebration, as it is for theirs.