The current owners have allegedly disappeared without a trace after refusing to accept responsibility for the vessel that ran aground. But the former owners of the megayacht, the Ashmawi family, have expressed their sadness and said that they would like to visit it

Costa del Sol-based members of the Ashmawi family, the previous owners of the megayacht that ran aground off Carchuna beach in Motril two weeks ago, have expressed their "sadness" at the fate of the boat and said that they wish to visit it in Motril.

The Neeveen, named after one of the daughters of the late Saudi businessman Sheikh Mohammed Amed Al Ashmawi, was sold to a French-Ukranian couple in December, who renamed it SK Yacht. 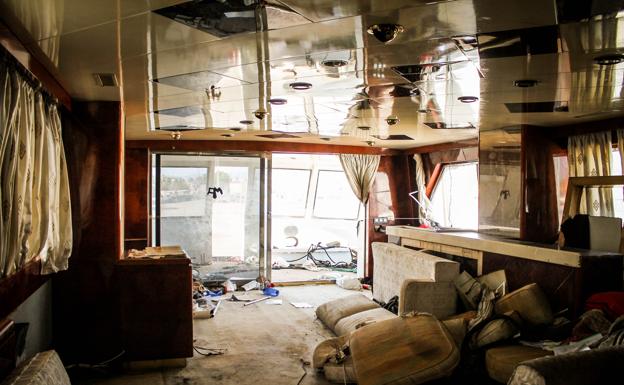 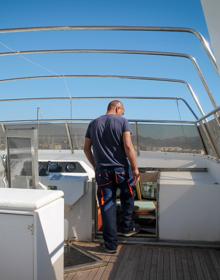 The couple have allegedly disappeared without a trace after refusing to accept responsibility for the vessel. They were rescued from the yacht earlier this month when a problem in the engine room caused it to veer off course while they were sailing from Marbella to Aguadulce in Almeria province.

Now, broken windows and furniture, tattered cushions, damp floors, splintered doors and cracks in the hull are what remain of the yacht that was once the host of lavish parties in 1990s Marbella. It is now in a warehouse next to the Capitanía Marítima headquarters in the port of Motril, awaiting its fate.

The only physical reminder of its summer soirées is the bar of the main salon; one of the few things that remain intact. However, a once elegant glass table has split in half, the beige carpet has black mouldy edges and some loose items including lamps and clothes are scattered around the room. A poster of Puerto Banús hangs limply on one of the wall of one of the five cabins and the bottom of the boat is still flooded with water, according to the technicians assessing the vessel.

Owner of stranded megayacht refusing to pay for rescue

The yacht has four cracks through which water has entered, with the largest being on its port side. Water has got into the three engines and the pressure balloons that were used to refloat it and transport it to Motril's port last weekend have also caused some damage.

Capitanía Marítima, which now owns the rights to the megayacht, since the French owner denied responsibility, will be able to leave the boat in the dock in Motril for up to year. It will then either be auctioned off or scrapped. Salvamento Maritimo and Spain's Ministry of Transport are still believed to be planning to pass the bill for the rescue to the French owner.