The fire has already devastated 5,000 hectares of land / efe/Alba Feixas

After a "complicated" night the districts of Acebuches and Ízbor, in the municipality of El Pinar in Granada province are cut off

The wildfire that broke out last Thursday (8 September) in the Granada municipality of Los Guájares continues to rage and level one of the Emergency Plan for Forest Fires in Andalucía has been declared.

After a "complicated" night that means the districts of Acebuches and Ízbor, in the municipality of El Pinar in Granada province are cut off, it was hoped that the rain would help dampen the flames.

Director General of Forestry Policy and Biodiversity of the Junta de Andalucía and operational director of Plan Infoca, Giuseppe Aloisio, said that he hoped that rain which fell in the early hours of today, Tuesday 13 September, "will give some hope for a change in the weather and a higher humidity that will allow the flames and the advance of the fire to be controlled".

Speaking to Canal Sur Radio, Aloisio explained that "it has been a very complicated night, with a lot of wind that has made it very difficult in many places and has not allowed the work to be done to try to stabilise a defensive line and try to close the perimeter.”

The latest Infoca estimates calculate that the Los Guájares fire has more than 5,000 hectares of burnt area and a perimeter of more than 60 kilometres. "Last night the fire extended quickly, with erratic winds from the storm front that is forcing firefighters to retreat to safe areas and wait for better opportunities," Aloisio said.

The Junta maintains active Level 1 of the Emergency Plan for Forest Fires and residents of the districts of Acebuches and Ízbor, in the municipality of El Pinar are confined to their homes, where the Guardia Civil had to evacuate nine people from some remote properties.

The rains that started early this morning are forecast to become heavier this afternoon, which will help to prevent the flames from advancing further. "The situation right now worries us, but we are also encouraged by looking at the sky, to see if the atmospheric conditions will give us a hand and the rain will be an ally, unlike the wind tonight,” Aloisio explained.

The evolution of the fire on Monday forced the closure to private traffic of the GR-3204 road between Lecrín and Los Guájares, between kilometres 10 and 24, a stretch that has been restricted to fire-fighting vehicles to stabilise the fire.

In the early hours of Tuesday morning, around 150 professionals were on the scene with seven heavy fire fighting vehicles and five units of heavy machinery. 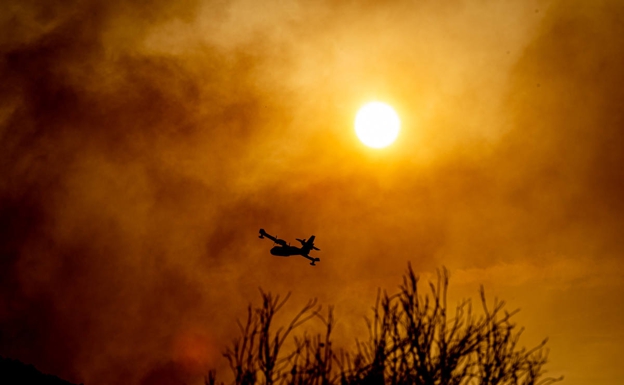 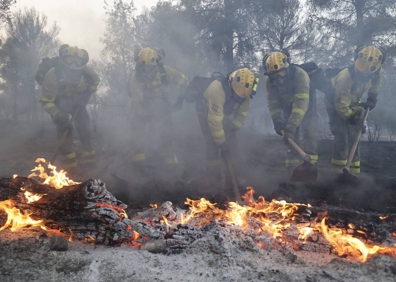 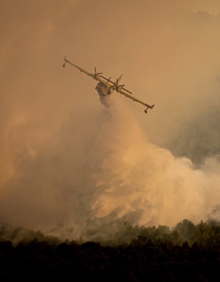 Firefighters and planes are trying to tackle the blaze / Pepe Marín