Benjamín and Laura with their son Aitor and Laura’s daughter Daniella. Benjamín also has a son, Darío, who lives with his mother. / MIGUE FERNÁNDEZ

Laura García and Benjamín Albarracín’s love story began in October 2015. Their relationship developed so rapidly that after just a couple of months they decided to live together. She had a daughter from a previous relationship, Daniella, who was nearly five; he had a one-year-old son, Dario. Everything turned out very well: “My daughter started to call him Daddy; both children accepted it very naturally,” says Laura, who works in a paediatric clinic in Malaga city centre.

It wasn’t long before they decided to have a child of their own: Aitor, a small earthquake who has just celebrated his fifth birthday and has cemented the foundations of a new family nucleus that would have been unthinkable 40 years ago, although it is perfectly normal today.

“We’re not married but we do want to register as a common law couple,” they say. For now, they have no intention of walking down the aisle.

Future challenges for families: manage tensions and be careful about planning when to have children

This family reflects the way households in Malaga province have changed in the past 40 years, in terms of family structures. The hegemony of a married couple with children has been left behind and now, in the 21st century, there is a new social reality with family groups coexisting alongside the traditional model: single-person households, two-parent, single parent, childless, with children, couples with no formalised relationship, families where parents have separated or rebuilt from previous relationships. The traditional format now lives alongside options which would have been completely unimaginable at one time. To give an example for context, more than half of all babies born in Malaga are to parents who are not married (55.09%), when in the 1980s the percentage was barely 4.5%.

This social change is included in an analysis called Andalucía and Provinces...How have we changed?, which is a compilation of indicators from the Institute of Statistics and Cartography of Andalucía (IECA) to compare the population - which has grown from 1,005,166 inhabitants to 1,696,463– and households from 1980 to 2020.

“It has been a rapid and radical change, but at the same time gradual and consistent in one specific direction: towards diversity. That has changed the family structure and culture,” says Elisa Chuliá, a professor of Sociology at Uned and a researcher at Funcas.

“What was extraordinary at one time is seen as normal in society now. We have learned to accept it with no moral reservations whatsoever. The positive reading of this evolution is that people have gained more freedom, there is no doubt about that,” she says.

“In the 1960s and 1970s marriage was a social event. People used to start living together after their wedding, but now it has become normal to cohabit first. It’s rare nowadays to find a couple marrying without having lived together, or having lived with a different partner in the past,” says Chuliá.

Factors behind the change

What factors have led to this situation today? In Chuliá’s opinion, the transformation of households in Malaga, which have evolved more or less on a par with Andalusian and Spanish society, is based on several factors.

“Women’s financial independence is fundamental in this process. Their incorporation into the labour market in a stable and continued manner, even after having children has changed everything,” she says. Improved facilities for the care of the elderly have also played a crucial role, because they have “relieved the families of the responsibility for their care”.

To find the seed of social change we need to go back to the decade of the 1960s, and specifically the change of mentality among those mothers who, although they grew up in a conservative period with a very limited vision of gender roles, made a fundamental contribution to Spain’s social history.

“The mothers of the generation known as baby boomers - in Spain they were born at the height of the Franco dictatorship and also experienced the transition to democracy - were committed to educating their daughters, creating a new reality for them which differed from their own. They favoured social change, and tolerance. In fact, from a moral point of view, they also evolved to positions more compatible with the reality for their daughters and, now grand-daughters,” she says.

After this step, women began to want to make money and advance in their professional careers, with a desire to enjoy life and live longer. “As a direct consequence we see a delay in having children and that also influences the assisted reproduction techniques that make it possible to postpone childbearing until a later age. All this is reflected by a delay in committing to relationships, in deciding to have children and form a family. We now live longer, have more freedom and fewer family obligations,” says Chuliá.

Then in the 1980s the Divorce Law was approved. “Separations were rare in the 1970s; the connotation was that they were dishonourable. Now divorce and separation are normal and when a couple break up they usually settle down again with a new partner or family unit,” she explains.

How families have changed

in the last 40 years 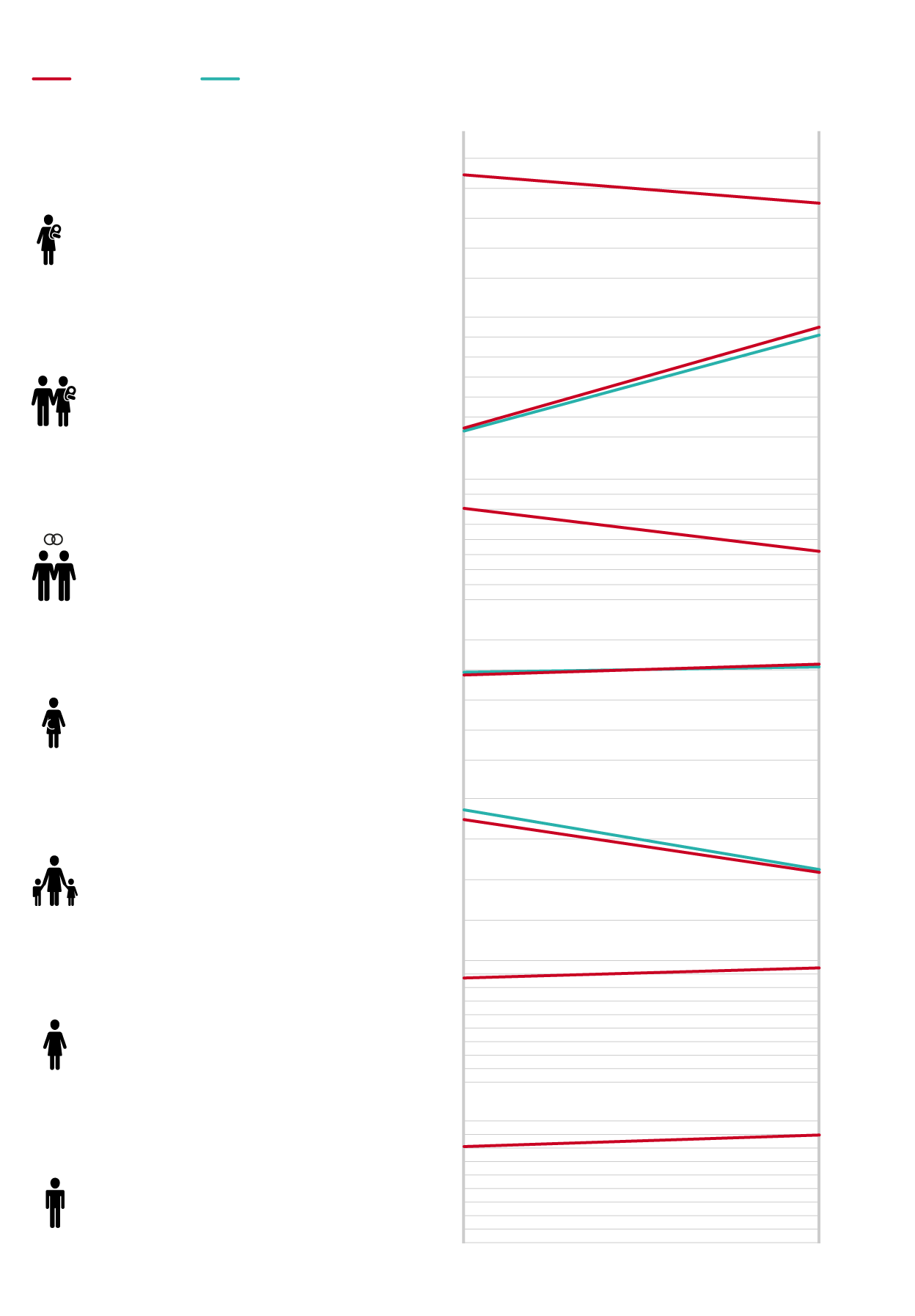 How families have changed in 40 years

In fact, families are going to have to carry on resolving situations that were unknown before, such as break-ups and their consequences and tensions among new families. It raises questions that, however, families appear to have been able to cope with.

“From an institutional point of view there has been a certain weakening but from a social aspect the family has not been harmed because it continues to fulfil its functions very well despite the changes,” she says.

“In this context, marriage is no longer considered so important from a family point of view”.