History. In the late 1960s and early 1970s matches took place on board the American warships which anchored in Malaga bay during their missions in the Mediterranean

In the 1960s the Mediterranean had become the setting for many of the tensions of the 'cold war'. The USA and the Soviet Union were vying for control of certain strategic points of the planet. The Strait of Gibraltar and nearby area was one of the places marked in red by both blocs. After the Spanish Civil War, the US tried to win over the Franco regime and those negotiations ended with the Madrid Pacts of 1953. Under those agreements, four American military bases were to be set up in Spain in exchange for economic and military aid.

This is the reason that the main Spanish ports in the Mediterranean, including Malaga, were for decades a base for the ships that made up the famous Sixth Fleet of the US navy. These enormous vessels that sailed all round the world had thousands of crew members who were an important source of income wherever they set foot on firm ground.

Of course, the sailors who spent so much time away from home also had their hobbies. One of these was basketball and that is what lies behind one of the strangest stories about this sport in Malaga. The crews of these enormous ships included some young university students, and some even made it to the NBA. To stay in shape they used to organise basketball matches with teams from the places their ships visited. Those were very early days for this sport in Malaga. It was not very well known, but there was a group of players who were passionate about it and they had no hesitation in accepting the challenge to play against the Americans. Sometimes teams from the bases at Morón and Rota would come to the city, but the biggest attraction was going to play on the American aircraft carriers and huge destroyers.

Martín Urbano: "I was worried because, in my innocence, I was wondering how we were going to be able to play if the ball fell into the sea"

The members of those teams still remember the matches with the Americans perfectly. They are names that form part of the history of basketball in Malaga, the 'old ones' as they are also known: José María Martín Urbano, Jacinto Castillo, Paco Ramos Llorca, Fernando Corrales, Alfonso Queipo de Llano and Joaquín Gallardo 'Guachi', among others.

They become emotional when they talk about it now, because that contact with a parallel society, American, where basketball was born, had an impact on them and the sport has brought them together forever. But how was it possible for those Malaga-USA matches to take place?

Queipo de Llano says Antonio García Melero and Juan Rodríguez Soto were key to this. The first matches took place on the Maristas pitch and also in the Plaza de la Marina, where the baskets were brought from the old Tabacalera factory in the Huelin district... 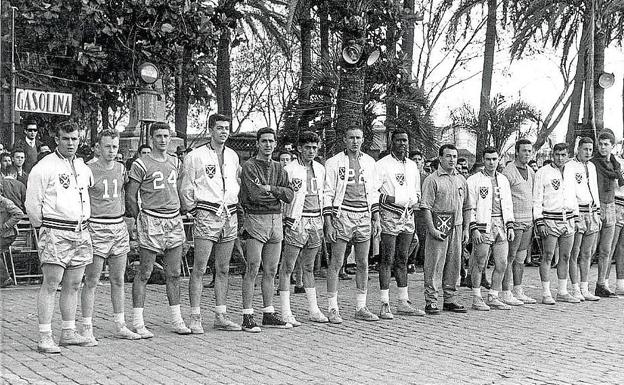 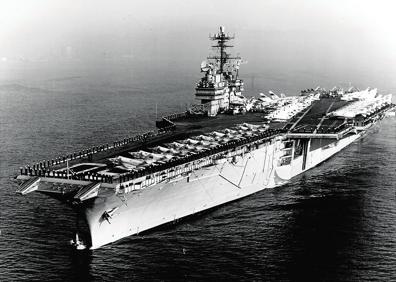 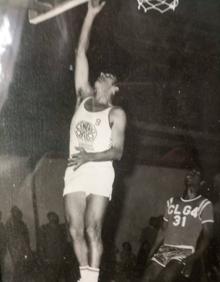 "They were the ones who made contact with the Americans and the ones who called on us to play some games at the Maristas and Los Agustinos. There were visits to the ships and quite a few of us went there to play. They sent boats to take us out to the ships and they gave us snacks and Coca-Cola. I remember there were some players from American universities and the NBA on those ships. They were brilliant, they always won. Their basketball was light years ahead of ours, but we played by counter-attacking. We had Bonilla, Jaime Farache, Julio Vida, Fernando Corrales, Jaime Porras and Pepe Diano, who was very good and had been in Buenos Aires. His parents were Spanish and had emigrated to Argentina. That was the first Maristas team to travel around Andalucía, the Ademar de Maristas," says Queipo de Llano, from his formidable memory.

Those were other times and the American ships were so big that they couldn't enter the port and had to anchor in the middle of Malaga bay. They used to send launches to pick the players up and, of course, that was very exciting for people like Jose María Martín Urbano.

"The most interesting thing I remember is that there was a ship, I don't know if it was the Saratoga, that had to stay out at sea because it was so huge. To go and play, they sent launches to fetch us and take us out to the ship. I was worried about how we were going to play, because what would happen if the ball fell into the water, in my innocence and the little we knew about the world in those days. When they took us up on the deck I was frightened by the sheer size of it. There was a hangar with several basketball courts and backboards like in the films, arched, and the space was enormous. Their teams had a lot of incredible players, crazy about playing in American shirts. I remember perfectly how they gave us small gifts, and we used to buy chewing gum and American tobacco there. They used to give us Coca-Cola too, but we already knew what that was because it was being promoted in Spain at the time. They played park basketball, the type that is played in the streets, and that was more attractive for us," says this former coach.

The Saratoga, the Independence and the Puget Sound were some of the ships in the Sixth Fleet on which basketball matches took place

Jacinto Castillo, who also played with those teams, remembers it as if it were yesterday and he is still impressed by the magnificence of ships like the Saratoga and the Independence.

"We were freaked out, it was like something from outer space as far as we were concerned. I will never forget arriving at the ship in one of the launches the aircraft carriers used to use, and it was gigantic. There was nothing bigger in those days. A big hole would open up in the side and we would go through there. We used to play in the third basement. They showed us round the ship once. It had restaurants and supermarkets and different kitchens; it was like being in the United States, with everything you could think of...the basketball court wasn't out on the deck, it was indoors, and that caused a second problem. The floor was rubber. There was a layer of rubber over the iron and our shoes used to stick to it. Then, another problem was that the baskets were hung from the ceiling, and we didn't have those in Malaga at the time. Those were the first ones we had ever seen. The backboard was curved and much smaller than we were used to. It was really difficult to get the ball in," says Castillo, fondly.

The former player and trainer, who at one time was also a scout for the NBA's Milwaukee Bucks, says that unlike other branches of the American army, the aircraft carriers allowed taller people in the crew for technical reasons and that made it even more difficult when it came to playing them. Castillo also remembers matches on board the Puget Sound, which was an enormous ship that was used to assist and recover lost ships.

Fernando Corrales, a sharpshooter of the time, also remembers matches with the Americans, although in his case it was against the teams from the bases at Morón and Rota.

"For some reason I didn't go to the matches on board the ships, but I did play against them in Maristas. Imagine what it was like, when we went onto the pitch and saw how tall the American players were... they came with their Converse All-Stars, tracksuits and kits. We were impressed by their boots alone. We did our best and nearly always lost, but we tried," says Corrales, who Martín Urbano says was the "figurehead" of the team.

Joaquín Gallardo 'Guachi' laughs when he remembers the legendary All-Stars. "We were desperate to get some of those boots. The locker rooms were impressive. I remember that one time the Americans were worried because they had a logistical problem. They needed 5,000 dozens of eggs and we told them that it would be impossible to find those in Malaga," he jokes.

Some of the pioneers of basketball in Malaga still have the gifts they were given by the Americans (patches, caps, some badges) but the impression of arriving on a ship several hundred metres in length is their most vivid memory, as Paco Ramos Llorca describes. He has some photos of matches, and he even took his wife to see the ship.

"There were 5,000 men on that ship. They picked us up in the port and took us out to it, it was a world all of its own. They moved the planes out of the way to clear the pitch. They hit us hard because they were good, but we were hard too. We beat them in El Palo, I do remember that. And among the crew there were some men from Puerto Rico who spoke Spanish and they took us on a tour of the ship with our wives," he recalls.

Half a century later these players still remember one of the most curious moments in the history of basketball in Malaga as if it were yesterday, despite all the years that have passed since then.