María shows one of her scars. / ÑITO SALAS

María, 18 years old and 27 scars that tell of a miracle

María’s heart stopped three times that night. She was, she says, “practically dead”. She had two stab wounds to her neck, and six on her back.

A cut ran from her eye - she was a millimetre away from losing it - to her left ear, which was split in two.

One of the stabbings had pierced her right kidney, which she lost.

María had a sunken skull where it had been kicked, and three metal fragments embedded in her head. They were pieces of the knife with which her ex-boyfriend allegedly stabbed her.

The 18-year-old had lost a lot of blood when she was admitted to the Clínico Hospital in Malaga on 5 May. She was placed in an induced coma and operated on.

María was 15 when she met her boyfriend in Fuengirola, where she lives. Two days later she celebrated her 16th birthday, and they became official. He was 22 years old, lived with his parents and didn’t study or work.

“At first everything was great. He was jealous, but that was it… I thought I had found someone who understood me,” she tells SUR in an interview to mark International Day for the Elimination of Violence Against Women.

The first time he hit her was two months into the relationship. “We argued and he hit me. I asked him to leave and he did. He called me and wrote to me all the time, but I didn’t answer,” says María.

“He asked me to meet because he said he was in a bad way, that he was going to die... When I went, he showed me a jar of pills [...] I forgave him. And there started almost two years of him hitting me and me forgiving him.”

“He would throw me to the ground and drag me by the hair. His way of hitting was very aggressive,” she says.

“If I went out with my friends, he got angry. If I talked to a boy, he asked how I knew him, if I had got off with him... I said he was a childhood friend, but he didn’t care. The next day, or that same night, if he could, he would hit me. He said that it was all my fault.”

In public, he was a typical nice, friendly boy, who was liked by everyone.

The manipulation occurred “little by little”, explains the young woman. “He started to control me by saying ‘don’t wear this’, ‘don’t go out with them’, ‘don’t say hello’. He separated me from my friends, from my family... He broke my computer because I had photos with my friends on it and he didn’t like that life. I stopped partying because I thought, ‘When I get home he’s going to hit me’.”

Early in the relationship demanded that she block all the male followers from her social media. He isolated her more and more until she felt invisible.

-What would you say to a girl who is feeling that way right now?

-That she is not alone. I thought I was, but no. There are so many people willing to help you. And I would also tell her that after all the bad something good always comes.

During the pandemic, he moved into his girlfriend’s house. She even helped him find a job that he gave up on the first day.

One day, he elbowed her in the ribs. That blow was not the worst, nor the most painful, but it was the one that made her realise that she could not tolerate any more.

She told her mum that he had pushed her.

“I went to him and told him that he had five minutes to pick up his things and leave my house, otherwise I would immediately call the police,” says Ana, María’s mum.

After the breakup, the harassment began. “There were days where I had 80 missed calls on my mobile from seven different numbers.”

She eventually agreed to talk to him. “I asked him to return the money he owed me from the TV and the computer he broke. We agreed on about 600 euros. I let him pay me little by little... he would leave it in my mailbox while I stayed in the house.”

The day of the attack he told her that he was going to give her 150 euros, through the usual method.

However, in the evening he contacted her and told her that his flatmate had left him without a key.

This is how he got María to go from Fuengirola to Benalmádena. “He insisted that I go to his house and that I had to see him that night.”

Joining together to call for an end to violence against women

He opened the door and came out with some notes in his hand. “He told me: ‘Take your money.’ He put it in my hand and then added: ‘And now you’re going to pay’.”

From then on, “I remember practically nothing, I am not aware of what happened…From the ground, I heard him say something like this: ‘I killed my ex-girlfriend. I’m handing myself in’.”

Her attacker called 112 and the police came in a matter of minutes.

Their report records their conversation: “As soon as she came inside, I punched her in the face and threw her to the ground. Then I kicked her several times in the head, went to the kitchen, took a knife and started stabbing her. I wanted to kill her, my intention was to kill her.”

The judge sent him to prison, where he continues to wait for trial. 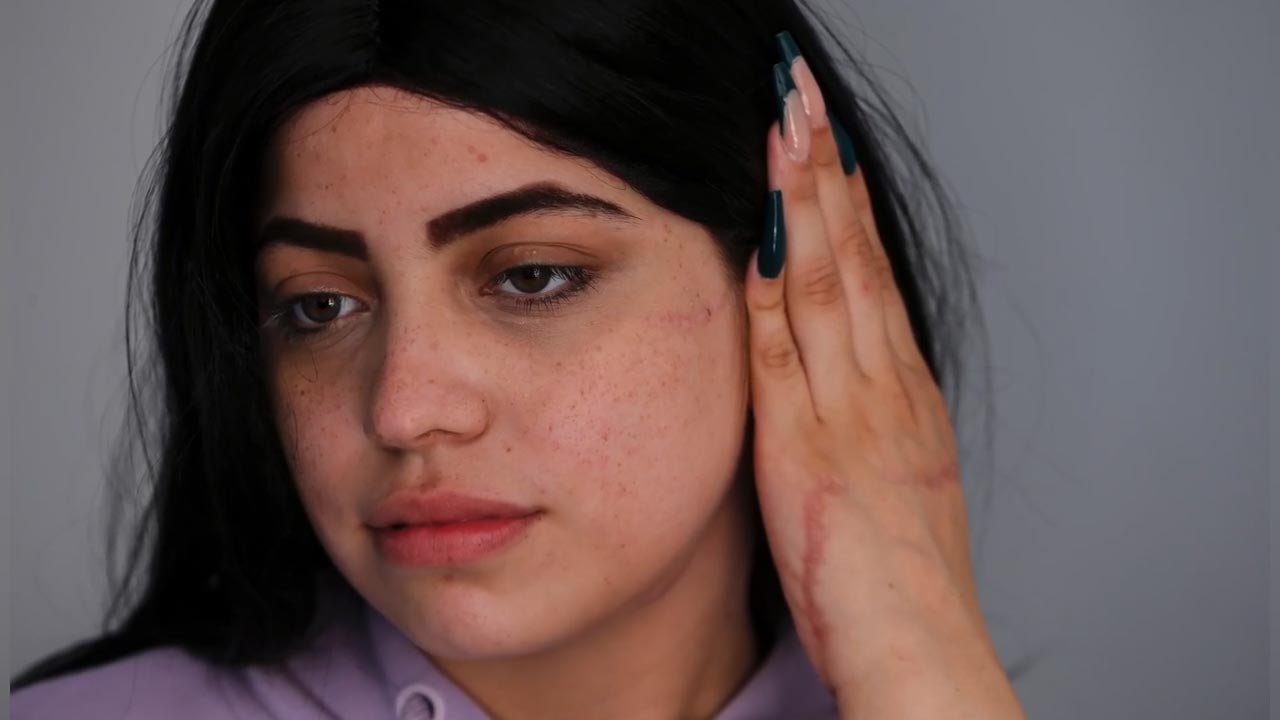 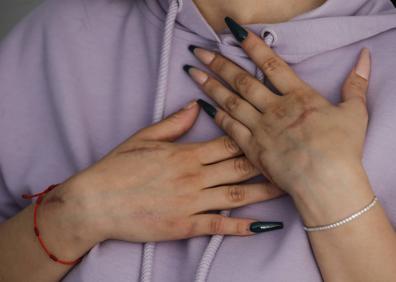 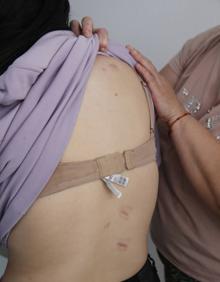 The first operation was on her head. The neurosurgeon told her mother that it would take an hour, but it lasted more than three.

After surgery, the doctor informed Ana that three fragments of the knife had been removed from her skull and that they had needed to restore the bone with a kind of putty.

The second operation was on her abdomen.

Surgeons had to open her stomach to remove a kidney and drain the blood clots that were constantly forming due to internal bleeding caused by the stab wounds.

“It’s the biggest [scar] I have. I told my mother that I already have the line, so now I only need the squares to make a chocolate bar,” jokes María.

On the fifth day in the ICU, María came out of the induced coma.

“It was amazing. I woke up to hear a voice telling me that I couldn’t leave, that I had to stay and fulfil a mission,” she recalls.

“I thought, ‘Dear God, was it you who spoke to me?’ When I told my mother, she replied: ‘Of course it was, this is a miracle’.”

At first she was scared that her ex-boyfriend could go in the ICU at any time.

Little by little she became aware of the seriousness of her wounds, which meant her head had to be shaved.

“When I woke up bald, I started calling to the doctors. ‘Who shaved me? I will kill him!’ I said jokingly.”

Her friends bought her wig with donations from people who know her and the Avates women’s association.

María still wears her wig while she waits for her hair to grow and gradually cover her head wounds.

Furthermore, María’s tutor went to see her at the hospital and helped her finished her ESO (secondary education) from the hospital bed, instead of a desk.

María has rebuilt her life. “It is impossible for me not to be well, with everything that the police, nurses, doctors, my tutor have done for me... I’m not alone. There is always someone who wants to help you… I wish someone who had gone through the same thing had told me at the time.”

In the six months since the incident she has had two anxiety attacks, one when she saw her ex’s friends in the street.

María gets cramps in her neck and hands, and has lost her sense of touch in two fingers. She also has one less kidney. But she doesn’t feel any resentment.

- What would you say to him?

-“Even though he did what he did, I wish him nothing bad. Let justice take its course, and that’s all. I’m not afraid of him. Not anymore.”

María wants to show a true story of violence against women, but also of survival: “I have already been dead, but I have returned. Now, everything I do I’m going to do with a smile; I go outside and thank God for being here, for being able to see people again, my mother, hug her…”

When she left the hospital, Ana told María that her story had been published in SUR. Now she wanted to give this interview, thinking of that voice she heard in hospital.

“I can help people see reality. That after the first blow many more can come. And tell other women who are going through the same thing that they are not alone.”

That, María concludes, is her mission.

Sandra, a victim of the Cártama acid attack, finally breaks her silence on the occasion of 25N

The colours of autumn

The wind and waves batter the Costa del Sol, in images