A hairdresser giving hope to the homeless

Isaac Bousnane, 35, spends his days off giving free haircuts to people who are living rough, to encourage them to pick up their lives again

He is becoming quite well-known on the streets of Malaga. Isaac Bousnane, 35, who is originally from Mesquine in Morocco, has become a hairdresser to the homeless in the city. First thing in the morning he prepares his backpack, putting in all the tools he needs to smarten up even the most untidy beards. He then starts his tour of the parks, squares and corners where, with difficulty, those who have almost lost hope of ever getting a roof over their head again survive. In Malaga about 150 people are in this situation, according to the council's Social Rights department.

These visits have become a way for this barber to "recharge energy" and he usually makes them on his days off. It was when the lockdown ended that he decided to help people who live in the streets and have no way of paying for haircuts themselves. He was living in Marbella at that time and he came up with this idea when he suddenly realised how many people he had seen living rough. "I want to carry on doing this for the rest of my life," he says.

"Actually, it isn't so much that they need a haircut; what they appreciate is being able to let off steam and have someone listen to them," says Bousnane.

"It isn't the haircut so much; what they really need is to let off steam and have someone listen to them" Bousnane stresses the same message to the homeless people he meets: "It's never too late to start again"

He always takes the opportunity to stress the message that it is never too late to start again, and he says that is what he wants to do, to help them to regain enough confidence to take control of their lives again and get off the streets.

Today, Bousnane makes his first stop in the Plaza de la Merced. On a corner, taking advantage of the heat from a fritter stall a few metres away, three people are sitting on a bench. They are surrounded by suitcases, wine cartons and alcohol bottles. He approaches them confidently. "Good morning, how are you? I'm a hairdresser and wondered if anyone would like a haircut," he says.

There is silence for a few seconds. The only woman in the group, 51-year-old Rosa María González, finally perks up, rather incredulous at this stroke of luck. While Bousnane places a gown around her neck and searches for his comb and scissors in his bag, they start to converse. She tells him he can call her Rosi. He talks to her with as much affection as he would one of his relatives, or like a friend.

"You wait and see how pretty you're going to look; they'll all be fighting over you," he jokes, to which she laughs out loud.

Carefully, he starts to untangle the knots which have been in her hair for days. "It's OK, you can pull it, there is enough pain in my soul scarring me already. It doesn't matter if a bit of my hair comes out," says Rosi, trying to smile but not really succeeding.

As he works, she starts to tell him some of the things that have happened to her in life. In her two lives, really, because her homelessness marks a before and an after. She says she was always the cheerful one in her household, but two years ago she lost her job and then other problems started to occur. Overwhelmed, she sought solace in drink and that addiction ended up with her living on the street.

"Most people in this situation have problems with drugs or alcoholism or with their families. The main problem is that they think they will never be able to get out of this and start again from scratch," says Bousnane. But they can, as he knows, because he is an example. Although he was never without a roof over his head, he says he lost everything when he tried to set up a business and the people who were going to be his partners disappeared with all the money.

Isaac Bousnane began his life over again from "less then zero", he says. He had no alternative but to accept his new situation because giving in, even though he often felt he didn't have the strength to go on, was just not an option.

"These people have to face up to the situation they are in and overcome their addictions," he says. He knows this is not an easy task, but nor is it impossible. He says so to these clients, respectfully, but without mincing his words.

The woman whose hair he has just cut gives him a big hug, which he reciprocates with genuine warmth. After sweeping up the hair on the ground and disinfecting his equipment, he puts it back in his rucksack and continues on his rounds. As we walk down Calle Alcazabilla he marvels at how beautiful Malaga is. "That's what I want to do: to make people who can't afford to go to a hairdresser feel beautiful too," he explains.

His next stop is the Paseo del Parque. As he approaches the open-air theatre at the Eduardo Ocón auditorium, he sees a familiar face. It is Daniel Kaminski, a 35-year-old from Poland, who has set out his few belongings in an area surrounded by trees, to give himself a certain privacy. Bousnane has already trimmed his beard once before, and he jumps at the chance of a second shave.

"I need help," says Kaminski. He doesn't think he is capable of giving up drugs on his own, or getting out of the hole he feels trapped in. He thinks nobody will want to employ him because he has no papers and isn't fluent in Spanish, although he speaks and understands enough to hold a conversation. 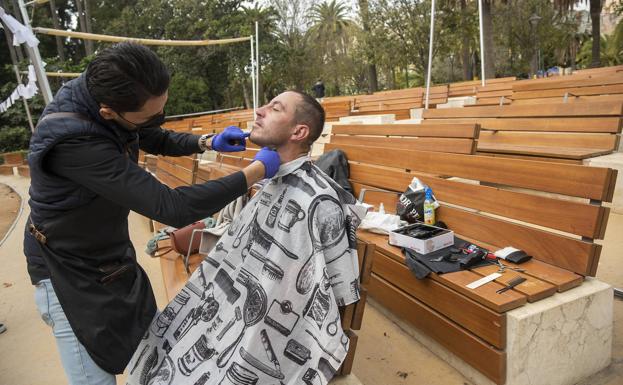 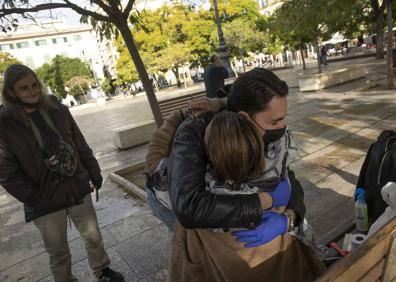 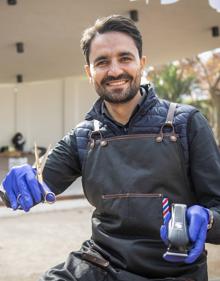 "You have to make the effort and ask; there are people who speak less Spanish than you and don't have papers either, and they manage to find work," says Bousnane, trying to motivate him. Despite the man's despondency, the barber doesn't lose patience and doesn't stop trying to convince Kaminski that if he puts his mind to it, he will eventually find a job. However, he tells him he needs to "change your attitude, because all this is in the mind".

To him, everything is clear. "These people need someone to give them a bit of a push, to help them recover their self-esteem," he says. He hopes that some of these people whose hair he cuts and beards he trims free of charge will find the confidence they need to take back control of their lives.

"There are some people who I never see on the street nowadays; maybe they went back to their own countries or they asked for help. I want to think that things are better for them now, anyway," he says, optimistically.

Bousnane wants this social project that he is carrying out on his own during the pandemic to end up doing even more good one day. His aim, he says, is for more hairdressers in Malaga, and even in other towns and cities, to join the initiative and create "a chain effect" to help people who are in a situation of extreme vulnerability.

It is with that in mind that he posts some of his work on his Instagram account (IG: Isaac Vantino), with before-and-after photos of people who are living in the streets. He says he has received messages from several people who are also interested in doing something to help. He is also thinking of giving lessons to apprentice barbers and for his students to become fully involved in the experience. "That way we could reach more people and be of more help," he says.

Bousnane also says he gains more than he gives when he improves the appearance of people in need.

"I have learned a great deal since I started doing this; it helps me to realise how lucky I am and to get to know people who have their own story and are sometimes not even treated as human beings," he says.

This hairdresser is an example of the fact that, despite everything, there is still a place in this world for humanity and empathy.

Almond trees in flower across the province - in pictures