Images taken from the security camera video (left) and the police investigation (right). / A- M. C.

Torremolinos street vendor murder: the suspect's walk gave him away

Both the prime suspect and the hooded individual caught on CCTV point their toes inward when walking, a condition known as being pigeon-toed

Ahmed Azim, 35, of Moroccan descent, born in Casablanca and raised in Valencia, was shot in the early hours of 19 April 2021 on Calle del Buen Consejo in Torremolinos. Three clean shots, one of which was in the heart, from a 9mm parabellum pistol. Police initially thought that it was an act of revenge.

As in any investigation, agents started by enquiring into Ahmed's life and reconstructing his past and looking for any potential enemies. Here they were met by the first surprise: he had no connections with drug trafficking or organised crime. He was a street vendor and worked in markets in Malaga and Cadiz.

The owner of the Las Flores B&B located in the centre of Torremolinos told the police that Ahmed arrived in August 2020, eight months before he was killed. He stuck to a strict schedule, working eight hours every day. He often had a handful of people coming to see him, one of whom was his colleague from the markets.

A witness said that the suspect was "troublesome", who got in "heated arguments with other vendors"

The lack of previous records related to drugs, along with his scarce social life, the well-established routine he stuck to religiously and the fact that he was not trying to hide seemed to be clear indicators that this was not a revenge murder by drug traffickers. This added further mystery to the case because the murder seemed to be the work of a professional hit man.

On the morning of 19 April 2021, Ahmed left the B&B at 5.40am, as he normally did. He wore a white T-shirt and dark tracksuit bottoms. He walked towards the street where he had left his lorry which was a striking yellow colour and had a dented roof.

Before he could even start up his van, a hooded man appeared out of nowhere, and, less than a metre away, he pulled the trigger six times. The gun fired at least three shots. The third was the one that killed Ahmed. The bullet damaged his heart, liver and left lung.

In the dead-quiet of the night, none of the neighbours identified the bangs they heard as gunshots. At the height of the pandemic, and with restrictions still in full swing, there was not a soul on the street. Ahmed's body was not found until nine in the morning.

The police inspected all of the security cameras in the area and confirmed that the shooting had been recorded by one of them. In the video, a man with his hood up, a surgical mask, hands in his pockets and a gunbelt placed over his shoulder was spotted. This same individual was filmed walking towards the area by another camera. This image would prove to be a key element in the investigation. All there was left to do was put a name to this person.

One of Ahmed's colleagues said that he was an "aggressive" seller who sometimes became a bit "provocative", motives which led him to believe "someone could have done something to him". In his police statement, the witness confirmed that there had been disagreements between Ahmed and two other vendors, one nicknamed 'The Portuguese' and his son.

On Sunday 18 April, Ahmed received a call from one of his workers who did not want to work in Marbella the following day, out of fear of crossing paths with The Portuguese. The worker was annoyed with Ahmed as The Portuguese's stall was right next to his.

They said that The Portuguese and his son were "troublesome" in the workplace, "often getting into provocations and heated arguments with other vendors", which made him "scared of his possible reaction". He didn't want problems with anyone, "especially not The Portuguese", he revealed in his statement.

Due to the worker's feelings of reluctance towards working the next day, Ahmed asked for the phone number of The Portuguese's son to talk with him and resolve the rivalry. The phone call, which lasted just over three minutes, was recorded at 2.35pm on 18 April, exactly 15 hours before the crime was committed.

It came as a surprise to this employee that neither Ahmed nor The Portuguese went to the Marbella market the following day. Hours later he learned that his boss had been shot dead in his lorry just as he was about to go to Marbella.

During his interview, officers showed this witness a video of the hooded man who they believed had committed the crime. When they asked him, the man revealed that the height, build and gait were the same as that of the son of The Portuguese, "larger in the torso area, with slim legs".

The posture of the masked person captured in the video also caught their attention because it was very similar to that of the prime suspect "who always had his hands in the pockets of his sweatshirt, hunched over", according to his statement.

In order to tie all these observations together, agents from the drugs and organised crime unit (UDYCO) requested a physiognomic investigation from the forensic science police department. The investigation consisted of comparing the two videos: one of the hooded man, recorded just before the crime occurred and one of the suspect – the son of The Portuguese - who days later was recorded walking calmly down the street. 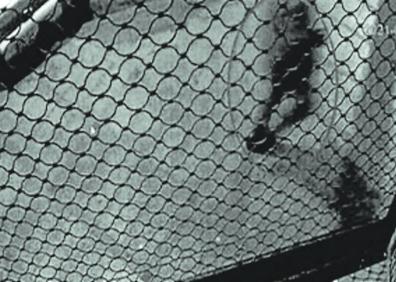 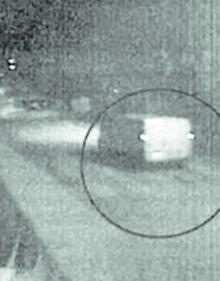 The security camera recorded Ahmed leaving his Torremolinos accommodation on the morning of the shooting (top); the suspect caught on camera and the suspicious van.

According to the report, a "similarity in the angle of progression of the feet" is observed, which is "a lot more visible in the dynamic display of the video".

The physiognomic study concluded that in both videos the same pigeon-toed walking pattern is observed, with it being more pronounced on the right foot.

The team also observed the "noteworthy elevation of the tip of the foot at the start of the step". In relation to the body type, in both cases, the individuals were similar.

The line of investigation pointed definitively towards the son of The Portuguese, a 29 year old man. In this first phase of the investigation, they verified that the suspect used a false identity and that he had previous convictions in Spain. They also checked the vehicles that he used. Then they reached the second key clue in the case: a white Renault Trafic van registered under the name of his partner.

The investigators inspected the images from 21 security cameras in Torremolinos that captured a van with the same description driving around at the same time and in the same area in which the crime was committed. On analysing and verifying the captured vehicle with the suspect’s van, they discovered that both vehicles were missing the black plastic frame but only on one side. Not only this, but the roof and the tyres were different colours and the brand emblems on the back part of both vans coincided.

However, they were missing the number plate. One of the security cameras managed to capture it, but only partially. They had the first two numbers and the three letters which coincided in both images. However, knowing that this would not be sufficient, the investigators requested a report from the National Department of Traffic of all vehicles in Spain with similar characteristics to the van and with the same two numbers and three letters on the number plate.

The result was conclusive. There were only two vans with these same characteristics. The first was a black Nissan located in Valencia, although it had been unregistered in 2018, without a passed MOT or valid insurance. The second was the Renault Trafic under the name of the partner of the suspect.

An image of the suspicious van captured by a security camera.

The investigators reached the conclusion that the son of The Portuguese used this van to get to Torremolinos, where he searched the area hours before the crime was committed "with the intention of finding the victim's vehicle". He was arrested on the 24 May 2021.

The Public Prosecutor concluded that the son of The Portuguese meticulously planned his actions to ensure make sure the attempt was succesful. He committed the crime in the early hours of the morning “knowing that because there was still the lockdown curfew in place after 11pm, there would be nobody in the streets who could hinder his plan”.

Prosecutors are asking for a 26-and-a-half-year sentence for murder and illegal possession of a fire arm as well as 100,000 euros as compensation to Ahmed’s father. A private prosecution by Ahmed's family is also being made.

The son of The Portuguese denies the accusations, stating that the van recorded was not his. His lawyer will ask for his release. For now, he has been remanded in custody, awaiting trial for the murder of the street vendor.