pEarly tourism.Local aeronautical engineer Álvaro Rojas alongside one of the aircraft. / SALVADOR SALAS

Malaga city is now known for its long list of museums, and like everything in life, some of the collections receive star treatment and are promoted far and wide. Others are little known, although their cultural value may well be greater.

This is the case of the former aerodrome known as El Rompedizo. What was the Costa del Sol's first ever airport is located just alongside the terminal where today private jets take off and land; and, thanks to the work of its members and volunteers, and the sponsorship of airports operator Aena, it has become home to the most important collection telling the story of civil aviation in Spain.

And what makes this extensive collection so significant is a new arrival: a unique piece that can only be viewed here in Malaga: a real engine made for an Airbus A380 (the largest passenger aircraft in the world) donated by its manufacturer, Rolls-Royce, thanks to the mediation of one of the firm's engineers, Álvaro Rojas, who is originally from Malaga.

However the city's Museo Aeronáutico, which received 20,000 visitors a year before the pandemic, mainly school groups and families with children, is home to many more pieces that help visitors understand how flying has evolved. And it starts with several real aircraft, such as those that arrived on the Costa del Sol in the early days of tourism.

The old terminal that is now home to the exhibition is in itself a journey through time, taking the visitor back to 1948, barely a decade after the end of the Civil War. A building with a desk, a boarding gate, a bar and a tiny control tower from where, when the primitive telecommunications failed, they made signs at the planes with lights. "They say that in the [city's district of] Limonar, someone built a house just like this," said Joaquín de Carranza, the centre's guide and caretaker.

Among the gems on display in the outside courtyard, which was once the boarding area, is the plane that brought the first Scandinavian visitors to Torremolinos, the Convair 440 Metropolitan operated by airline Kar-Air (initially known as Karhümaki Airways).

The Finns are very fond of this piece of history and every year pilots and cabin crew get together to have a party around the plane, which, in the 1950s, used the very latest technology in air travel. "It was very important for Malaga as it was the first plane to use the international airport and the tarmacked runway," said De Carranza.

The journey from Helsinki took three days, with stops to pick up passengers in Sweden.

"They were the 'crème de la crème'; four tickets cost as much as a [Seat] 600 car, so imagine the spending power of those people who came here."

For this visit we're lucky enough to have an exceptional guide, Álvaro Rojas. From inside you can see the structure of the aircraft, which doesn't differ too much from modern ones: a skeleton with ribs and a fine fuselage, "which is only there to maintain the dynamic shape". 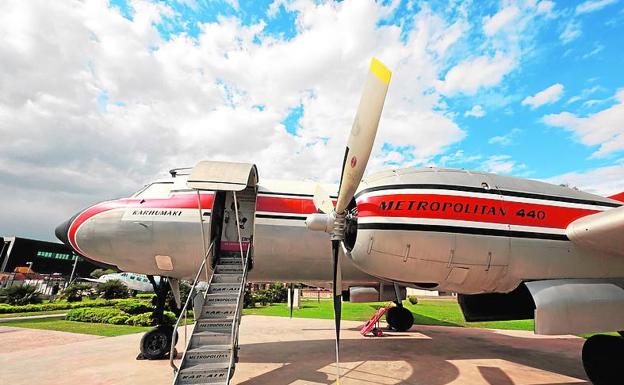 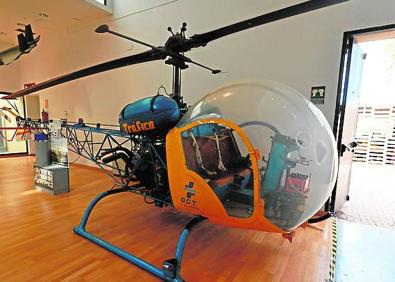 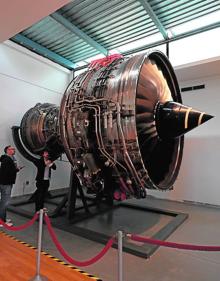 Some of the pieces on display, including the Airbus A380 engine. / SALVADOR SALAS

The cockpit is also well preserved, with its controls and cables, as are some of the original seats, and the hold with suitcases from the period.

Next to it is a private jet, a Beechcraft operated by Spantex, which brought executives from firms such as Philips for holidays.

The preservation of the pieces is exceptional: "It is all maintained by volunteers from the Friends of the Museum Association (Asociación de Amigos del Museo), some of whom are former pilots, but there are also ex-bus drivers, teachers... They are people who are passionate about aeronautics and contribute what they can in their spare time."

The group has around 100 members, of whom 30 are especially active. Their jobs include working as guides, seeking out and restoring pieces to increase the collection, organising the rooms and even building real flight simulators.

Inside a legendary DC-9

In the small control tower, which looks more like a kind of pigeon loft, the controller used a radio, but when this failed, there were alternatives such as a torchlight pointer to make signs in Morse code to communicate the direction in which the pilot had to land. If that didn't work either, they had to resort to using a flare gun: but with green flares, not red ones.

The next stop is Iberia's legendary McDonnell Douglas DC-9. That plane was called Pedro Alonso Niño, and the museum has preserved the nose, with the complete cockpit and the interior, just as it was when it flew. "All the buttons are there, the throttle and reverse thrust levers, and the circuit breaker panel."

The outdoor exhibition ends with a DC-3, considered "the Land Rover of the air, and is still flying in some African countries after 60 years, as it can land on soil or anywhere".

Spain has few spaces similar to this museum managed by Aena in Malaga: just the Air Museum (Museo del Aire) in Madrid, which is military; and an old terminal preserved in Lanzarote, which is used for protocol purposes. There are some private collections, "but open to the public like ours, there's no other, and what's more it's free," said Joaquín de Carranza. In fact here they receive pieces from airports and collections from all over the country.

And so the visit reaches its final stop, the room that now houses the real Rolls-Royce Airbus A380 engine, and which makes this Malaga museum the only place in the world where a machine of these dimensions can be freely visited. Bringing it here is a feat that has turned a young local engineer into a "hero" among Malaga enthusiasts.

"This is a piece of a different category, something you'd find in a museum in London or Paris," said De Carranza, who remembers when the association "signed" Álvaro Rojas to work as a guide when he was still a student.

"Now that he has gained a professional status he has thought of us. One day he called me and he said: 'I've got an engine for you'... The kid that arrived one day for a visit has given back all the passion that the museum once gave him."