A decade of street art in Soho

Malaga's Soho neighbourhood is known as the city's arts district, filled with bars, galleries, street art, and home to Antonio Banderas' Soho Caixabank theatre. But the 20 hectares of land between Muelle de Heredia and the Alameda Principal weren't always this way.

In 2010, neighbours and business-owners living in the area introduced the idea of turning the urban space, slightly dilapidated at the time, into a cultural district. This led to the creation of the association Soho Malaga, who outlined that the regeneration of the area would not only benefit local inhabitants, but also be of interest to tourists. 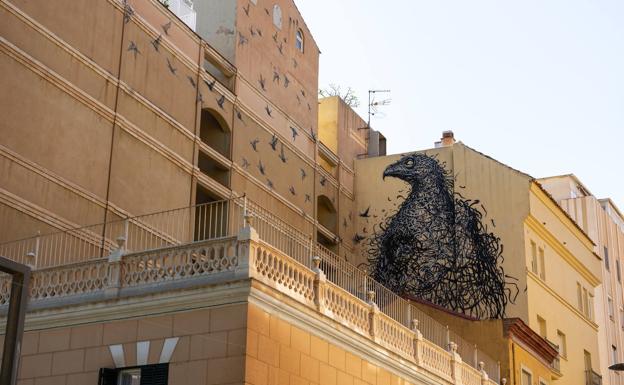 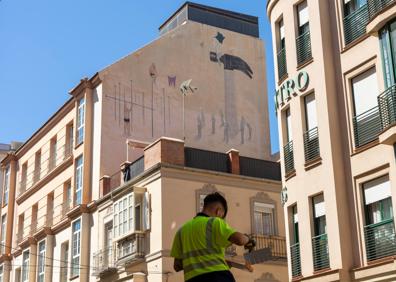 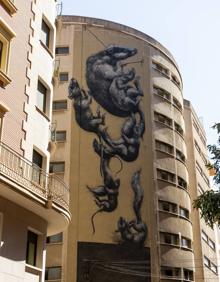 Some of the street art murals created in Soho. / SHAY CONAGHAN

On 10 February 2011, the city council presented its plans to transform the Ensanche Heredia neighbourhood into a cultural hub. The project had several objectives, focused both on urbanisation and culture. It sought to restore civic and economic activity and increase pedestrian accessibility. The other principal aim was to change the neighbourhood's image, giving it a unique character of its own which would complement that of the city's historic centre.

One of the principal aims was to change the neighbourhood's image, giving it a unique character of its own

The initiative even received funding from the European Union. The European Regional Development Fund (ERDF), a financial instrument of the European Commission, allocated one million euros to facilitate the achievement of these goals.

Nowadays, the streets of Soho are filled with independent shops and bars, even counting on an independent microbrewery. Yet with this transformation, recently concerns have arisen about the problems the neighbourhood's gentrification might cause for local residents.

The Malaga Arte Urbano Soho (Malaga Urban Art Soho) project, also known as MAUS, was a key factor in the district's transformation. Born in 2013, the project was multi-faceted, spanning different cultural mediums, including theatre performances in the street and outdoor photography exhibition. The idea was not only to boost the cultural identity of the neighbourhood, but also to make it accessible to everyone.

But the star of the project is the street art it commissioned. Nearly a full decade later, the murals created by international street art giants such as Obey, D*Face, BoaMistura, Okuda & Remed and Faith 47, adorn the streets of Soho. Obey and D*Face's enormous murals, side by side next to the River Guadalmedina have become symbolic of the MAUS project.

'It's about sharing art with anyone and everyone' 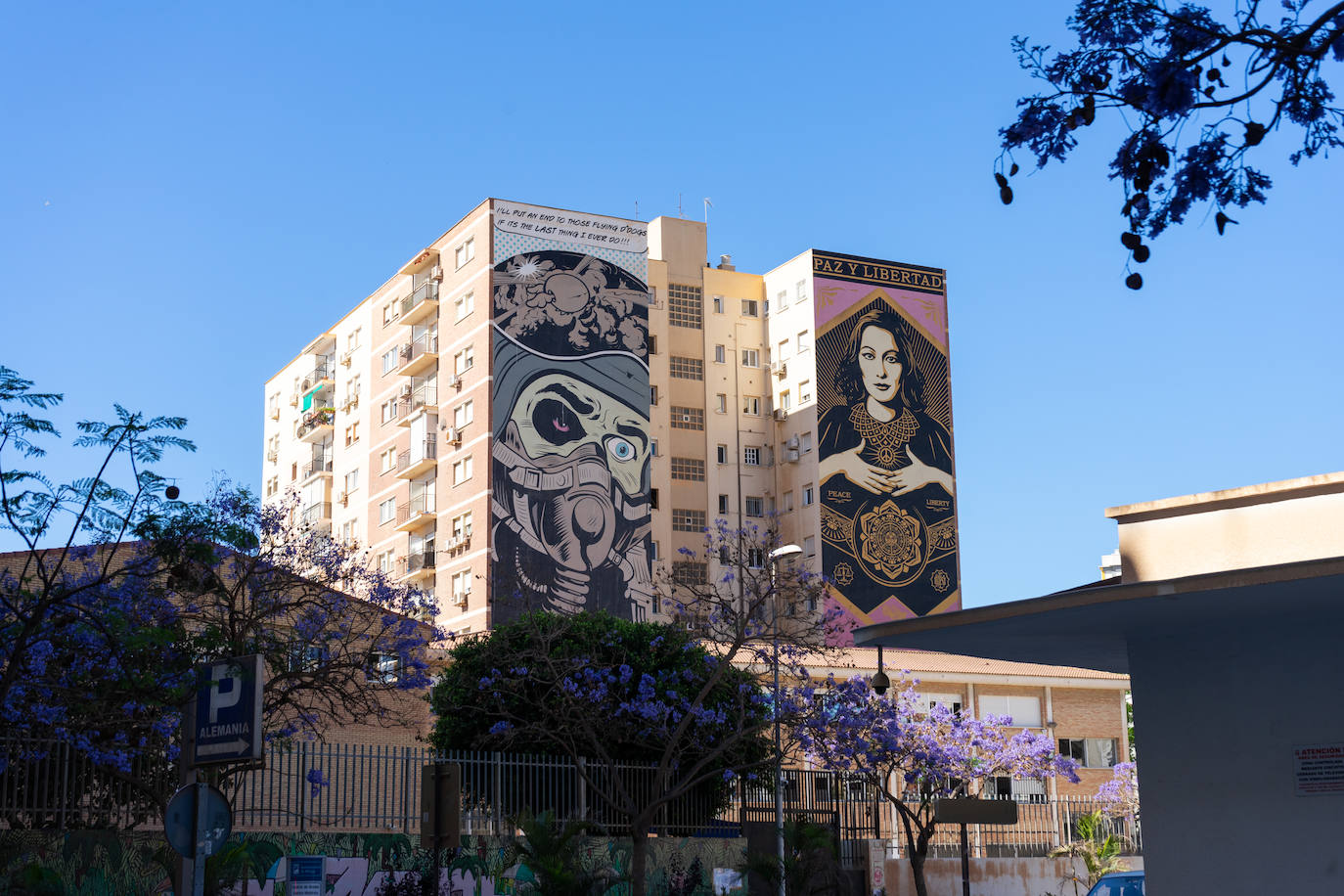 D*Face's creations can be found in cities all over the world, including in Paris, Mexico City, New York and Tokyo. A self-described "Londoner, born and bred", Dean Stockton (his real name) tells SUR in English that he has fallen in love with Spanish cities like Madrid and Malaga. "They feel really alive and the food is great - plus awesome walls to paint!" he says.

D*Face's 120-metre-high mural can be seen alongside Obey's work of a similar size in Malaga. The piece is called Run Away, and was first created for his gallery show in the city's Contemporary Art Centre (CAC).

His earliest artistic inspiration came from skate magazines. "Artists like Jim Phillips and Vernon Courtlandt Johnson were definitely among my biggest idols when I was younger. Something about that bright punk aesthetic, the super clean black lines and just the attitude that their work had, it was all I wanted at that age," he says. "Obviously the likes of Warhol and Lichtenstein have had a big impact on my work too and I owe a lot to their having paved the pop art path back in the 60s."

The MAUS project sought to make art more easily accessible. D*Face says that the public nature of urban art is the medium's biggest defining factor and advantage. ''There are no preconceptions about who should see it, or what it stands for," he says. "It's about sharing art with anyone and everyone." For this artist, the streets are "a never-ending canvas", where creators can "share a political message or view, or just paint something cool on a wall".

Speaking about his participation in the MAUS project, he explains, "To be part of a city's growing culture and for that to be recognised in that way is really awesome. I think, for a lot of people, street art is still aligned with graffiti and run-down city suburbs but it's a misleading stereotype - street art is made to benefit a location, not degrade it."

The future is exciting for D*Face. As well as an upcoming exhibition in Los Angeles, he playfully adds that he's got "some big stuff in the works at the moment, bigger than ever before in fact but I can't share all the details or that'd spoil the fun."

The initiative was led by Fernando Francés, the director of the Centro de Arte Contemporáneo (Contemporary Art Centre or CAC). He worked with the city council and a group of cultural managers to turn the district's streets into an open-air gallery, and the programme involved an investment of 121,050 euros.

Local graffiti artists were also encouraged to participate in the project, and the pupils of the García Lorca School worked together to produce a mural around the perimetre of the school grounds.

To celebrate almost a decade of street art in Malaga, SUR in English reached out to some of the iconic artists who participated in the MAUS project.

'All works have meaning and can have an impact'

BoaMistura, a graffiti and muralist group based in Madrid, were an integral part of the MAUS project. Their very name, meaning 'Good Mix' in Portuguese, makes reference to the diversity of styles and opinions expressed in their art.

They explain that their sources of inspiration are varied, that "sometimes it's the place itself, others it's the social context, or the political context. Sometimes it's a conversation with some neighbour, or just an idea that you want to share."

Their mural on Calle San Lorenzo belonged to a series of murals they were creating at the time, which aimed to communicate a message to their audience and establish a dialogue between the creator and viewer.

For BoaMistura, there are three main factors that distinguish street art as a medium. Firstly, the "direct relationship with the citizen", secondly, the "scale of the works, which can range from being tiny to being absolutely huge. They all have meaning and can have an impact."

Lastly, they praise street art's "ability to give a new narrative to public spaces, to the city. Murals are incorporated into citizens' everyday lives."

They describe Malaga's transformation in the past 10 to 15 years as "terrific", and that "culture, architecture and urbanism play an important role in that". They add that it has been interesting to watch Malaga evolve since their participation in the MAUS project in 2013.

Like D*Face, BoaMistura have created murals in cities all over the world, and don't plan on stopping any time soon. Having just completed a project in Antofagasta in Chile, where they were working in two schools in a low-income community, they are now in Senegal, participating in the Dakar Contemporary African Art biennial. Once they return they will continue to build up their international repertoire, heading to London, Florida, Tangier and Quito, as well as working on a project at home in Madrid.