Cycling across the north coast of Spain

From San Sebastián to Santiago de Compostela. Ash Maer explains why the quaint coastal towns of northern Spain are well worth a visit - especially for foodies

It was last September when my girlfriend and I set off to cycle from San Sebastián to Santiago de Compostela over two weeks.

Our plan was to follow the Camino del Norte along the coast and not to get lost — and we failed at both!

It's important to explain that this is a much hillier route than the more popular and flatter Camino Frances. Some notable differences are that there are fewer yellow arrows marking the way, accommodation was scarce (due partly to Covid-19) and people in the Basque Country are a little grumpier than down south.

But moaning aside, the Camino took us through some stunning coastal areas that we wouldn't have visited otherwise.

I won't bore you with the cycling itself, as this will be my third travel feature on cycling the Camino now! Instead, I'll focus more on our favourite stops.

What I will say is that we finished several kilos lighter than we started and that I am banned from organising the next holiday.

We started in San Sebastián, where we collected our hire bikes and spent a day getting lost around the old town. This was one of our favourite stops for two reasons; the food and the view of the bay, which is touted as the most picturesque in Europe. In the evening we bar-hopped and ate pintxos that were so beautiful we took their pictures. A word of warning though, it's a bit pricey here! 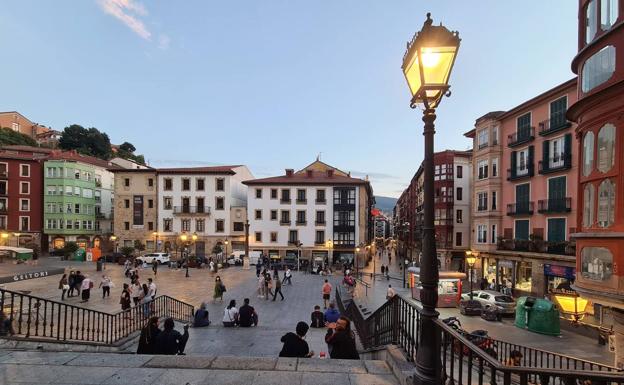 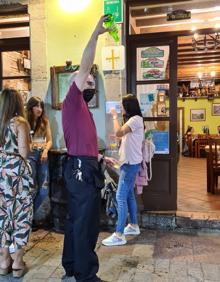 Next was Guernica, infamous for the large oil painting by Pablo Picasso, following the bombing of the town by German aircraft in 1937. If I'm brutally honest, I was disappointed with Guernica; dare I say I found it dull, so we peddled on to Bilbao.

This Basque city was a surprising hit for us both. I'd been here several times before but was always on the way to somewhere else. But on closer inspection, it had a bustling old town bursting with charming taverns and colourful architecture. So we hope to return for a long weekend.

The following day we stopped in a cosy village called Santoña, where we had some of the best food of our trip at restaurant Don Vino.

Next up was Santander, where after stopping to take a photo, we accidentally stumbled upon a ferry that knocked more than two hours off our cycle — result!

After celebrating our early arrival with a glass of wine, it quickly became apparent that there was no old town (I'm a huge fan of old towns!). It turns out much of the medieval city was lost in the Great Fire of 1941.

So, the centre looks quite modern with grand looking buildings everywhere, but there was too much to explore in one evening. We had a lip-smacking meal in a family-run restaurant called Bodega Funete De, before retiring to our hostel for a well-earned sleep.

Our next stop took our breath away — Santillana del Mar (which is neither flat nor by the sea I must add). This historic Cantabrian town is said to be one of the most beautiful towns in Spain, and I completely agree.

Walking through the centre was like going back in time, the place was overflowing with stunning medieval architecture. Unfortunately, we had booked accommodation in the following town — so we took photos and continued on.

However, our next stop Comillas was one of our favourites. This small town is peppered with striking architecture such as the Pontifical University, El Capricho (by the Catalan architect Gaudi) and the Sobrellano Palace.

Comillas has a reputation for being upmarket due to summer visits by the Spanish Royal family and well-heeled types.

So, in true regal style, we jumped on the packed tourist train and enjoyed a tour around the town, where a number of grand houses that featured in Spanish movies were pointed out to us.

Very early the next morning we cycled to Llanes, a cute, traditional fishing village that surrounds a busy port.

Town walls dating back to 1206 are dotted around the centre and there are plenty of historic buildings to stumble upon.

The rugged beaches are unspoilt and after a walk along the coast, we headed back to the old town, where we were told there was no beer, so they brought us cider instead.

We spent our evening being entertained by the waiters who poured cider from a great height into tiny glasses, while looking nonchalantly in the other direction.

It's worth a special mention that we had our best meal in Casa Pachón in the village of Salas. We had four courses, a bottle of wine and the best meRluza I've ever had in my life - for 12 euros each.

Salas was also our first stop on the Camino Primitivo. We decided to abandon the Camino Norte because the accommodation was all booked up and what was left was over priced and in the middle of nowhere.

This was due to many public albergues closing due to Covid and private run facilities running at 50 per cent capacity. 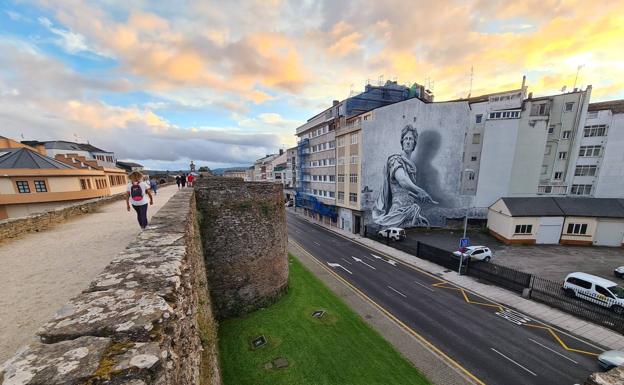 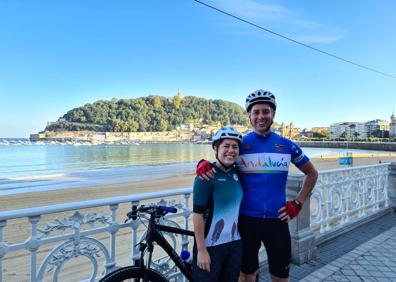 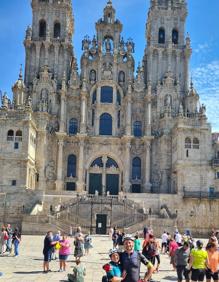 Our stop in Lugo was my favourite of the whole Camino. The city has a magnificent Roman past, including baths, a bridge and an ancient city wall that was declared a World Heritage Site in 2000.

Walking along the 2km-long wall that surrounds the historic quarter at sunset was one of my fondest memories of the trip.

Afterwards, we headed to a tavern for a well-earned vino and some free tapas. After all, No Vino, No Camino.

Our final stop was Santiago de Compostela of course, where we had our first lie-in for two weeks in Pension Via-Stella, before exploring this historical city. My top tip, don't bother with this tourist train, it was terrible!

In total, we cycled 829km, but with hindsight, we should have taken a few more days holiday to spread the distance out more.

However, if you want to eat some of the best food in Spain while exploring spectacular coastal towns, this is a thoroughly enjoyable way to do it.

We hired out bikes from www.tournride.com who deliver them to where you want along the Camino, before you drop them off later at their headquarters in the centre of Santiago.