Banderas and the cast just before the start of the show. / MIGUE FERNÁNDEZ

Behind the scenes with Banderas

In the final weeks of the show, we go backstage at the Soho theatre to see how it all works

The doors open 45 minutes before the performance, and everything is quiet in the theatre, but while you are settling in your seat and looking forward to seeing the show Company, it is bedlam backstage at the Soho Caixabank Theatre. The corridors are like Calle Larios on a busy day.

Technicians are checking equipment, singers practice their scales in their dressing rooms, the hairdryer in the makeup room is in permanent use, costumes are being ironed, musicians are tuning their instruments, sound technicians are rummaging in actors' hair to fit microphones that are so sensitive they can almost capture thoughts...it is like an army of over 100 soldiers, perfectly trained to ensure that every night goes well. Or if it doesn't, that nobody notices.

The Broadway musical is in the last few weeks of its run, and every day the wheels have to run smoothly. That isn't just a metaphor: the show takes place on a rolling stage that has to be perfectly oiled to make sure nothing fails. An MOT is carried out every day, two hours before the first song is sung, and this is part of the routine of checks that include lights, sound, set and everything else involved in staging the show. One by one, the technicians report to stage manager María Laporta, sitting at a desk at the side of the stage.

Every night, the actors gather before taking the stage to shout their war cry: "When you have friends like mine!"

On four screens, she controls everything down to the last millimetre to ensure that everything happens exactly when it should, although sometimes the computer has a mind of its own. Like the show when communication with the stage manager's desk was lost. "It was all sorted out in the end. Everyone knew what they had to do, so the first thing was to control their nerves and not show that anything was wrong," she says. "The audience had no idea anything had happened".

It is now almost 6pm and the actors have started to arrive. Carlos Segui, who plays Harry, one of Bobby's friends, the character played by Banderas who celebrates his 50th birthday on stage every night, is one. We follow him to the hair and makeup department, where he tells us that when he was told he had the part, the first thing he did was phone his parents to tell them he was going to act with Banderas. He is pleased the show will run for an extra week, until 3 April, and wishes it could be extended further.

"We're full every night and people give us a standing ovation; we don't want to go," says Lorena Calero, who is about to put on the brunette wig she wears as Kathy, one of Bobby's girlfriends.

The seat that Carlos had occupied is now taken by Silvia Luchetti. She arrives with a strong Argentinian accent, like that of her character, Marta, but soon changes to a Castilian Spanish which even Lope de Vega would applaud. "I have been in Spain for 20 years and nobody liked my accent, but then Banderas came along and wanted an Argentinian Marta.

Although he takes to the Soho stage every night and stays there for the entire show, Banderas is adamant: "I am not a singer

Argentinian? That's me!" says the actress. She says the original score by Stephen Sondheim is very demanding, but she loves the show Company, which talks about failure, compromise and the need to love in order to feel alive.

Then it's time to visit Bobby Banderas' dressing room. We go up one floor and hear Antonio's voice before we ring the bell. He is warming up his voice and a technician is fitting a microphone on his head. "I wear two, just in case. Once, in the song where I dance a lot at the start of the second act, sweat got into one and it stopped working, so they just opened the other instead and nobody noticed," he said.

Banderas is the director, promotor, lead actor and soul of Company. Every night he goes on stage at the start and doesn't leave it until the end. He must be tired after four months and more than 80 shows? He shakes his head, although he recalls his friend Almodóvar telling him, "Antonio, you're crap when you're tired".

He never tires of making plans, either. "I want to bring shows that nobody would do, but which have marked the history of musicals," he says. "Here we have 14 actors on stage and 26 musicians, and everything is live. Nothing is pre-recorded and when the Americans came they couldn't believe it, because that hardly ever happens on Broadway," he says, proudly.

At this point his brother Javier, the theatre administrator arrives, to organise a visit by a group of students from Esaem. "I have invited all the drama schools in Andalucía, with a bus included and a talk afterwards," explains Antonio.

We leave them in peace, although before we go, he stops us to show us a ceramic plate of Jesús el Cautivo. "It comes from Broadway and a lady from Marbella gave it to me when she came to see the show Nine. I was nominated for a Tony award and the show won, so I brought it here to give me a hand and we're doing well," he says. 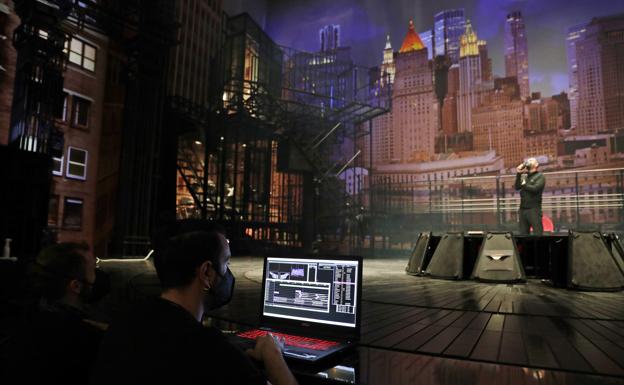 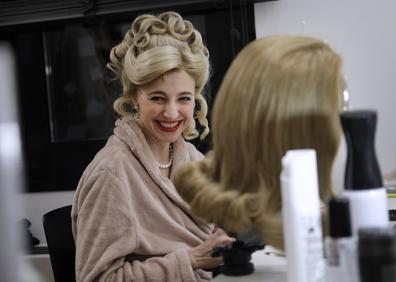 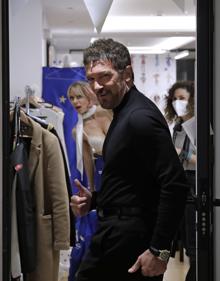 After chatting with a few of the other actors we go to one of the stage entrances, and find Banderas is already there. We hear a voice announcing "Ladies and gentlemen, the performance begins in five minutes".

"Right, are we all here?" he asks. Everyone seems tense, but excited. The stage is in darkness, almost completely black. And on to it steps Bobby, who is celebrating his 50th birthday, as he does every night at the Soho Caixabank Theatre, although at the moment the audience can't see him.

And then a spotlight comes on, and he says his first word: "Yes". And the show has begun.