The beginnings of the future pine forest. / ÑITO SALAS

Green shoots in the Sierra Bermeja

More than 9,000 hectares of woodland were destroyed by last year's fire. A visit to the area, six months later, shows how nature is starting to make a recovery in the Genal Valley

About 800 degrees. That's the temperature of a typical forest fire. Material like aluminium would have become liquid long before it reached that, in such torrid heat. In apocalyptic fires, like the one in the Sierra Bermeja last year, the air gets even hotter.

Pepe Montes was away when what he considers his second home began to burn. The first videos started to arrive on his mobile that afternoon in September, showing how the flames were spreading through the pine forest which covers the whole Genal Valley like a blanket. At that moment he was on a beach in Gran Canaria, 1,670 kilometres away.

"I had to get back," he says. "I knew I had to be there, to do everything I could to help". He normally drove around that area in his 4x4 every day and knew it like the back of his hand. He knows how every tree grows and can tell you the history behind every species. Pepe is 56 years old and is one of the environmental officers who work for the Junta de Andalucía. His paradise, the Sierra Bermeja, caught fire last summer.

People tend to think of Malaga as a place of sea, sand and palm trees, but the reality is different. Most of the province consists of mountains and woodlands. The fire in the Sierra Bermeja devastated 9,963 hectares within a perimeter of 83 kilometres. Pepe Montes got on a plane as soon as he possibly could, to change clear skies and sunbeds for an inferno of flames and ash.

That was nearly six months ago. Now he meets us in a parking area at Los Reales to tour the affected area. Here, where narrow roads twist like snakes across the mountain and fork in two directions, it is possible to start to analyse the situation.

One road leads to Casares and, if you turn to the right, to the municipality of Jubrique, the first to have been evacuated because of the flames. The speed with which the fire spread and its ability to destroy have been proven. Now the question is how nature is responding and whether a new era is beginning in the Genal Valley. A new green era.

The first thing you see, once Estepona is behind you, is very disturbing. Most of the pine forest looks as though it has been covered in black dust. Every now and then there is a green circle, like cotton swabs. Tree trunks stand about 20 metres high, lined up, one after the other. The silence is occasionally interrupted by the sound of a chainsaw.

Pepe starts the car and opens the windows, so he can talk without a mask on. Like a teacher trying to reassure a worried pupil, he turns and says "the pinsapo pines that we have here are used to living with fire". Then he points to the pale green patches on the mountainside: "That is what will guarantee the future. That is where what we call the parent trees are".

Those, he explains, are mature enough to have pine cones. Those cones open up and release a seed which embeds itself in the soil. "If nothing unusual happens and the climate is right, this will look like it did before. It doesn't need major reforestation. Nature's ability to regenerate is incredible," he says.

When? "Well, we know that what we're working on today will be what our children will see," he says. 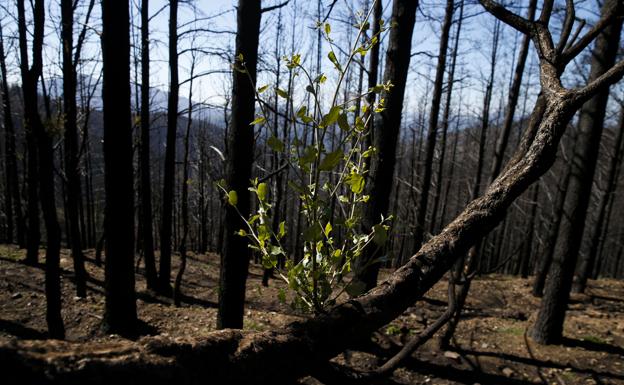 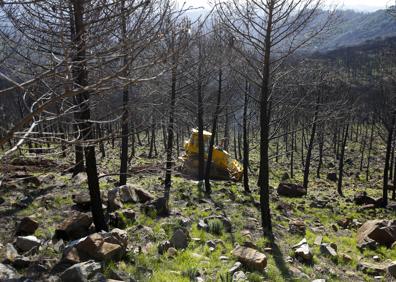 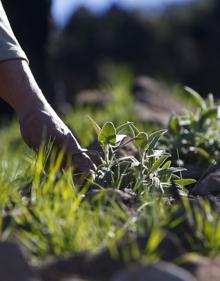 Antonio Ruiz, who is with us, is 61. His father and grandfather were both forest rangers. He still remembers how he had to drop everything while trying to tackle the blaze because the flames were on the point of devouring him and colleagues. "Sometimes, it's best to withdraw so you can come back the next day," he says. "Maybe, in some years' time, we will see the mountain looking more like it used to. Fires are cyclical and recurrent in the Sierra Bermeja, but this one was really bad," he comments. He thinks the area will take 20 to 25 years to recover.

The road continues through the dense black woodland. Green shoots can be seen on every corner, bringing a spark of hope. There is still a chance that this will one day return to being the green lung that it was before. "What we need is rain," says Antonio. "It has to rain much more".

Not everything can be left to Nature, though. Human planning is also needed to help the Sierra Bermeja recover. Teams are already working in different areas, removing dead trees and using them to create barricades to control erosion. It is specialised work. They have to know how to use the chainsaws and also very heavy machinery on extremely steep slopes, and they come from all over Andalucía.

Soil degradation and the loss of vegetation pose a high risk if there is sudden rain. The tree trunks are piled up horizontally and form small natural barriers to slow down the sediment and prevent another disaster if there is torrential rain.

By now, it is past midday but we still have several hours to go, travelling around the Genal Valley where about 7,000 people live in several small villages. The signs of devastation are omnipresent and ubiquitous. The remains of a lorry stand at the side of the road, but all that is left is its burned chassis. The owner has been notified several times, but has not responded.

Pepe and Antonio have time to speculate about the cause of the fire. "All we know is that it wasn't accidental," they say. The report from the Forest Fire Investigation Brigade is now in the hands of the prosecutors.

The search for more green shoots takes Pepe down a track that leads to a change in vegetation. Instead of pine trees, there are cork oaks, stained black but with new stems appearing near the top. "This part of the woods will regenerate faster," says Antonio. Paradoxically as it may seem, now that there are fewer trees, the new ones will be able to grow more vigorously. It's a question of maths. There are fewer roots in a soil that now offers a lot of nutrients. "The cork forests will recover, we can see that already. If it had rained, this would be even greener," he says.

But there are other signs that invite cautious optimism. If the Sierra Bermeja has its own jewel in the crown, it has to be the pine forest of Los Reales, which has the highest concentration of pinsapos in the world after the Sierra de las Nieves and Grazalema. About 100 hectares of Los Reales are covered with adult pinsapos, and this area of extreme ecological value still stands out like a green island.

The psychological cost of the blaze is evident in Jubrique. This village, with around 600 inhabitants, is well-known to people who enjoy walking. In September it was in the news as the first place to be evacuated.

María Morales, 85, believes September's fire was the work of the devil disguised as a human. "There was a moment when I thought we were all going to be buried in ash," she recalls, and says "the atmosphere in the village has been quite depressing since then".

María José Ruiz, 37, also lives in Jubrique. She says the sky turned beige because of the ash clouds. "The village looks very sad now," she says, because of all the trees that have been destroyed. When we tell her that one day it will be like it used to be, she says she doubts that it will be in her lifetime.

There are also a few green shoots for the local economy. At half-term the hotel was full. Alberto Benítez, the mayor, says things are improving little by little. "We went from always being full to nobody coming at all. Now, things are starting to feel a bit more normal," he says.