Lourdes Bueno, who makes decorative items using this ancient technique, has celebrities among her customers

It is less than ten years ago, when she was just 25 years old, that she began to learn the secrets of working with esparto grass from an octogenarian neighbour. Now, she has a shop of her own in her village, Frigiliana, thousands of followers on social media and clients in Spain and abroad. Lourdes Bueno never imagined that something that for her was just a hobby would end up being her very own business opportunity.

She has had excellent teachers. The first, mentioned above, was Serafín, who was 86 and shared the secrets of plaiting and other techniques used to work with esparto. “I used to go to a stable with him for the lessons, and people used to see me there and laugh,” she says. “You’re always trying something new,” they used to say

Little by little she gained the skill needed to create different things from esparto. Serafín died, and she continued to learn from others, who had no professional qualifications but a huge amount of experience, such as Francisco in Mijas and Joaquín, from Nerja.

It may seem an anachronism to work with esparto in the 21st century. For hundreds of years this plant was used to make essential items for everyday life, such as espadrilles and baskets. However, as Lourdes points out, these days it is a popular decorative element, which is elegant and rustic at the same time. 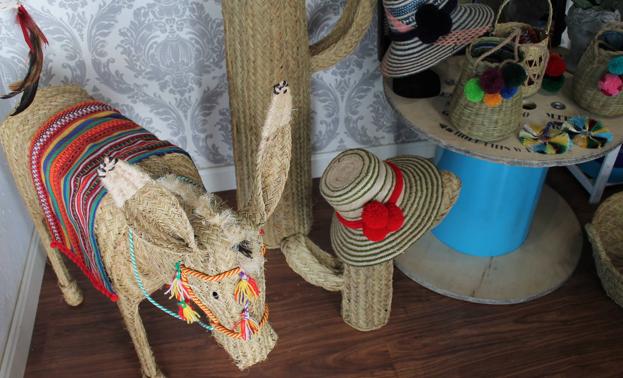 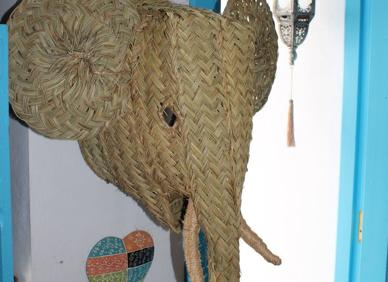 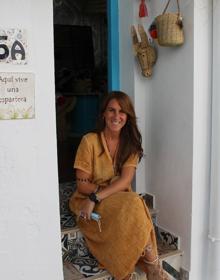 Some of the creations in the shop and Lourdes Bueno outside Rincón del Esparto.

After learning, Lourdes began to receive her first commissions from friends and relatives, and then she opened her own shop in Frigiliana, nearly five years ago. It is called El Rincón del Esparto, and is in Calle Don Íñigo, one of the streets that runs parallel to Avenida Andalucía, in the newer part of the village.

There, in her workshop, she makes an extensive range of items from esparto, from earrings and pendants to an elephant’s head. It was the latter that contributed to her success last year: the writer, journalist and former government minister Màxim Huerta bought one, and then shared photos of it on social media. Thanks to that, El Rincón del Esparto, which is on Facebook and Instagram, not only gained many new followers but also new clients. That elephant’s head became a trend and now people all over the country are buying them as a decorative feature.

Lourdes was so delighted with the way that Huerta had raised her profile that she decided to send him a bell made of esparto as a Christmas gift. Once again, that had the result of increasing her followers on Facebook and Instagram, which are her tools for online sales (she does not have an online shop).

Another celebrity who bought from her in 2020 was TV presenter Samantha Vallejo-Nágera. “She came to Frigiliana for a Masterchef programme and bought a donkey’s head,” says Lourdes. The result of that sale was also good for this young craftswoman’s business.

Thanks to some well-known interior designers, Lourdes’ esparto creations now grace some very prestigious restaurants, including a log basket which was commissioned for chef Dani García’s Lobito de Mar, in Marbella, and some lamps for Yucas Beach in Benalmádena.

She has also received international commissions, such as a collection of baskets for a fashion shop in Puglia, Italy. Before the pandemic, Lourdes also travelled to Ibiza in 2019 to take part in the Natural Adlib show.

Beyond fame and success, though, this is a passion for Lourdes Bueno. Every day she opens her shop from 10am to 1pm to attend to clients who come to see her creations for themselves. These include many foreigners who are visiting Frigiliana, one of the prettiest villages in Spain. “A lot of people from abroad like esparto, especially the Swedish visitors,” she says. 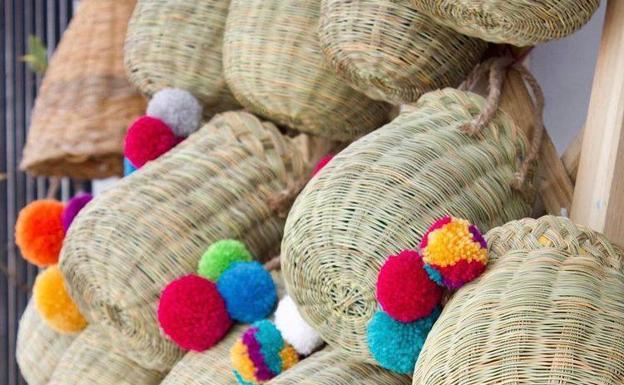 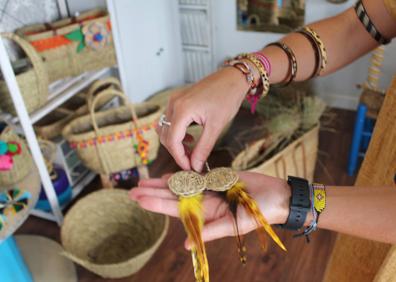 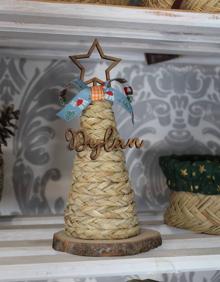 Baskets sold to a fashion boutique in Italy. Items can be personalised.

For the rest of the day Lourdes looks after her son and in the evening she spends some time creating new items or working on commissions. She also has to find time for another task, which is essential for her business: collecting the esparto grass from the mountains. From Serafín, her first teacher, she learned not only to make things with esparto but also how to find it and cut it. “When you can start using it depends on what it is like,” she says, referring to the greenest esparto. She has also used the cocido technique, which is an easier and more comfortable way of working, but it requires more complicated preparation, because the esparto needs to be kept in water for nearly a month.

The price of her creations depends on the amount of effort they have involved, and they normally range between 15 and 70 euros. Although she sells through social media, she also accepts commissions, including for personalised items.

Serafín also taught her how to manually weave the esparto in different ways, depending on the complexity of the creations. Francisco, from Mijas, taught her how to do the more complicated designs, such as the heads of donkeys, elephants and bulls. She has made and sold all of these. She has also tried making rams’ heads, but says they are so difficult to do that she won’t be trying again. She has even made headdresses, which were the most unusual commissions she has received.

Nowadays this entrepreneur from Frigiliana has not only found a secure job without having to leave her village, but has also become the youngest ‘espartera’ in Malaga province, extending the existence of an ancient tradition which is in danger of dying out.