Sustainable camping with a difference

It's fun, it's sustainable and it's very unusual. It's called Villa Sandía (the name means 'watermelon' in English), and it is one of the most innovative places to stay in Andalucía, in the Molino La Flor rural complex in Jimera de Líbar. Since July 2019, children and adults have been enjoying this colourful site where watermelons, cucumbers and gigantic wild mushrooms live side by side in the heart of nature, on the banks of the Guadiaro river.

Just as Don Quixote saw giants where there were only simple windmills, Candela Luque found old concrete 'tinajas' (large pots used for cooling water) as an ideal place to create small shelters deep in the countryside. Candela, who is now 28, runs this rural accommodation complex which was founded by her parents 30 years ago. Her youth and desire to innovate with sustainability led her to the so-called 'glamping', a new tourism concept which has arrived to stay, because it consists of rural accommodation which is respectful of the environment but without forfeiting comfort in any way whatsoever.

The company purchased about 20 of these old 'tinajas' and turned them into eight watermelons and 12 giant cucumbers. The watermelons sleep two people, and the cucumbers have an additional bed which is ideal for a child under the age of 12. «There is just enough space to sleep,» says Candela.

So, Villa Sandía is a campsite in the countryside where every watermelon and every cucumber has its own bathroom, which in this case has been designed in the form of a wild mushroom. As a result, this accommodation boasts facilities which are unthinkable on conventional campsites. Each of these giant fungi, equipped with washbasin, shower and toilet, is assigned to a particular watermelon or cucumber.

When she came up with the idea last year, Candela Luque could not have foreseen what was to come or imagined the way we would have to be living now, where hygiene is a priority. However, this young local woman explains that the only difference now is that guests are given a bottle of hand sanitising gel and masks together with their keys. «We were already doing what they are asking of us now, because we always did disinfect everything anyway,» she says. 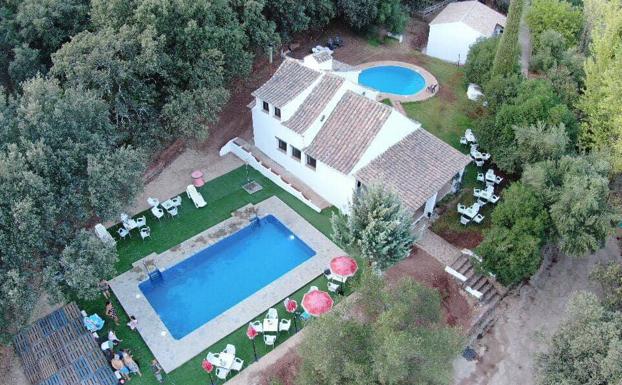 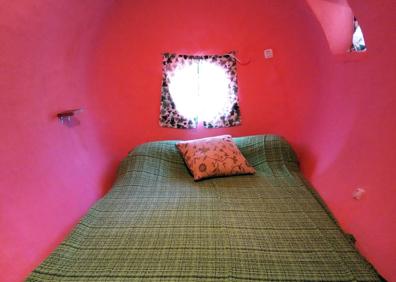 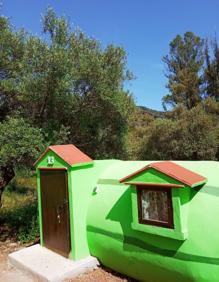 Anyone who sleeps at Villa Sandía will cover themself at night with disposable, biodegradable sheets, which are not only sustainable but also extremely hygienic. Each of the properties also has other basic equipment such as electricity, fans, chairs and a small table.

Another attraction of this original concept of camping is the space that exists between the watermelons and cucumbers and the communal areas for guests to use, including two swimming pools and the riverbank, where they can take part in leisure and sports activities, and the bar.

«Even when Villa Sandía is full, there are never crowds of people because there is no much space,» says Candela.

Despite having had to close during the lockdown, she is proud of how successful her idea of turning 'tinajas' into watermelons and cucumbers where people can stay has been. «We were even the first to be classified as a 'singular campsite' in Andalucía,» she says.

When she was asked to take over the management of this rural complex, Candela wanted to bring her personality into it and also her commitment to sustainability, while never losing sight of one very clear concept: «We don't sell luxury; we sell nature».

The price of this unusual accommodation is between 50 euros for a watermelon (sleeping two people) and 65 euros for the cucumbers (two adults and a child). Villa Sandía is part of an extensive rural complex on eight hectares of land on both sides of the Guadiaro, in the municipality of Jimera de Líbar. This unusual 'glamping' site is on one side of the river and two houses, Molino La Flor and Molino El Inglés, are on the other and sleep 15 and 20 people respectively. There is a walkway to cross the river. Molino La Flor costs 290 euros a night, and Molino El Inglés 360. Each of these houses has its own swimming pool and has access to other communal facilities, such as the 'pitucabañas' , little cabins which are scattered in the woods and designed to entertain the youngsters.

These old mills, which have been converted into rural houses for tourism, were the first form of self-catering accommodation to exist in this village in the Serranía de Ronda. Jimera de Líbar is in a strategic location, next to the Guadiaro river, between Benaoján and Cortes de la Frontera. In other words, between the Grazalema and Los Alcornocales natural parks and very close to valuable enclaves such as La Pileta cave and Las Buitreras del Guadiaro.